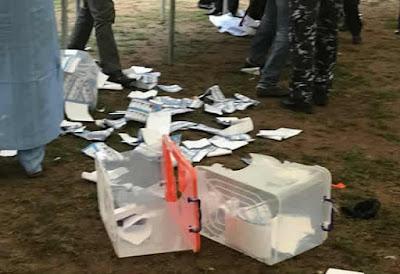 The supplementary elections held in Bauchi and Akwa Ibom states on Saturday were marred with violence.

Reports from many states indicated that the polls were characterised by violence, ballot snatching and other irregularities.

The Akwa Ibom State Police Command confirmed the arrest of some persons in connection with electoral violence in the rerun in the Essien Udim Local Government Area of the state.

Speaking with journalists at the LGA collation centre, the Police Public Relations Officer, Nnudam Frederick, said investigations into the arrests were ongoing.

However, the Niger Delta Affairs Minister, Senator Godswill Akpabio, dissociated himself from any form of violence in the election in the Essien Udim Local Government Area of the state. The minister, in a statement by his Chief Press Secretary, Anietie Ekong, on Saturday said his decision and that of his party, the All Progressives Congress, to withdraw from the election was sacrosanct.

He said the linking of the minister to the violence was not true, urging the public to disregard it.

Meanwhile, the candidate of the Peoples Democratic Party, Auwal Jatau, has been declared winner of the re-run in the Zaki Local Government Federal Constituency of Bauchi State.

Declaring the result of the rerun that took place in four voting points in three polling units in the Gamawa LGA, the Returning Officer, Prof Ahmed Kutama, said Jatau got a total of 15,405 votes to defeat his closest rival Omar Tata of the APC, who got 15,307 votes.

Earlier, no fewer than 10 persons were allegedly arrested for vote-buying in one of the wards in the state.