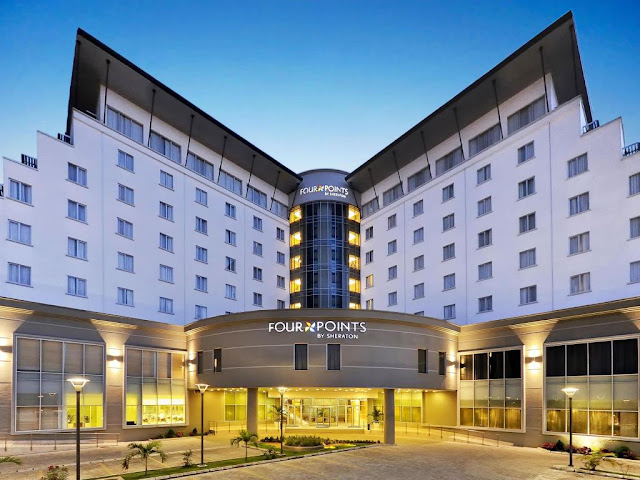 At least seven persons were injured on Wednesday after a gas cylinder exploded at the Four Point by Sheraton Hotel in the Oniru area of Lagos State.

While three persons were seriously injured by the explosion, four others sustained injuries from flying objects.

The explosion, which occurred around 12.35pm, also damaged about 10 vehicles on the premises of the hotel, while part of the building was destroyed.

NE learnt that some welders working on the premises of the hotel were using gas to weld some steel together, but one of the cylinder hoses leaked and the cylinder exploded.

It was gathered that while the welders were putting finishing touches to the last two pipes needed to complete the borehole project on the hotel premises, there was a blowback when the welding equipment was restarted, leading to a burst hose and eventual explosion of the gas cylinder.

An eyewitness, who was attending an event in the hotel and spoke on condition of anonymity, told our correspondent that the explosion destroyed properties and shattered the legs of an expatriate.

She stated, “I was inside the building when the gas cylinder exploded and immediately the building shook, the lift carriage dropped, a part of the building fell and so many vehicles were destroyed.

“At first, we thought that it was a bomb that exploded, because of the way the building shook, but it was later that we discovered that it was a gas explosion.

“We were ushered into the reception and from there, we went out. The explosion injured an expatriate and shattered his two legs; three other people were injured in various parts of their bodies and were bleeding profusely.

The Director General, Lagos State Emergency Management Agency, Femi Oke-Osanyintolu, who confirmed the incident, stated that the hotel’s emergency response plan was flawed as there was no emergency muster point.

He added that some of the injured victims had been taken to the Intensive Care Unit of the Lagos Island General Hospital.

Oke-Osanyintolu stated, “A total of three people sustained serious injuries as a result of the blast and two have been rushed to the Lagos Island General Hospital for intensive care by the LASEMA ambulance unit, while one was rushed to a nearby private hospital.

“Several cars and hotel room windows were shattered as a result of flying objects due to the blast. The situation is under control as the LASEMA Response Unit, Nigeria Police and the staff of the hotel are on the ground to ensure a swift recovery.”

Oke-Osanyintolu urged Lagos residents to remain calm as the agency would ensure no more gas explosions in the state, adding that the state’s Materials Testing Laboratory had been informed of the development and would conduct structural integrity and non-destructive tests on the building to ascertain its integrity.