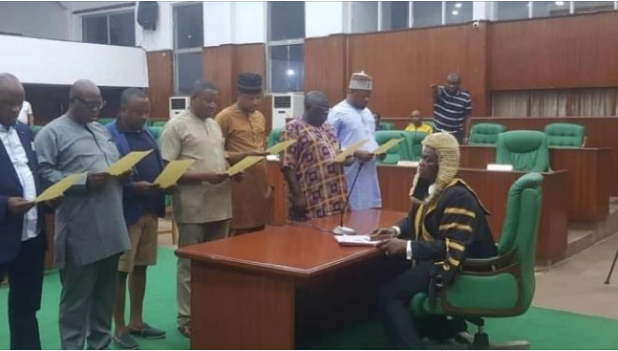 The Edo state house of assembly has declared vacant, seats of 12 lawmakers who are yet to be inaugurated.

This development comes months after nine lawmakers loyal to Godwin Obaseki, governor of the state, were secretly inaugurated, leaving their colleagues stranded.

The 12 lawmakers were among the 15 excluded from the inauguration in June, and are said to be in the camp of Adams Oshiomhole, chairman of the All Progressives Congress (APC) whose misunderstanding with the governor led to the factionalisation of the state assembly.

Yekini Idiaye, the deputy speaker, while addressing journalists in Benin, the state capital, said  the decision to declare the seats vacant was reached during plenary on Wednesday.


“Their constituents have been complaining and have come to us that they want their voices and concerns to be heard at the house. So, people who are willing to provide quality representation have to be elected to bring the matters of the distraught constituents to the floor for debate and legislation, where necessary,” he said.

Led by Julius Osifo, a former commissioner in the state, the lawmakers-elect had in June given Obaseki a seven-day ultimatum to give proclamation for a new assembly.

Prior to the controversial inauguration, Oshiomhole was said to have been perfecting strategies to oust Obaseki since he had majority of the lawmakers in his camp.

A source, then, told TheCable that “after the lawmakers loyal to Oshiomhole gave the governor a seven-day ultimatum to inaugurate the assembly, his camp reached out to five legislators who were on the side of the APC chairman and with this, they were able to form quorum for inauguration.”

In July, the house of representatives had also asked Mohammed Adamu, inspector-general of police, to shut the Edo state house of assembly, following the recommendation of a panel set up to investigate the crisis rocking the assembly.