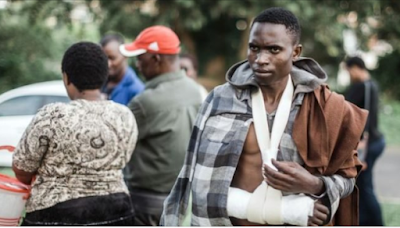 The Socio-Economic Rights and Accountability Project (SERAP) has asked the African Commission
on Human and Peoples’ Rights to sue to South Africa and seek $10 billion for victims of xenophobic attacks in the country.

Last week, shops and properties belonging to Nigerians and other Africans were looted and destroyed.

In an open letter dated September 6 and addressed to Soyata Maiga, chairperson of the commission, Kolawole Oluwadare, SERAP director, said the attacks are a violation of Nigerians and other Africans.

Oluwadare said the commission should make it clear to the South African authorities that victims of the attacks deserve compensation.

“These attacks constitute serious violations of the human rights of Nigerians and other African citizens in South Africa,” he said.

“[The commission should] seek in the case to the African Court, punitive damages and adequate compensation of $10 billion (USD) on behalf of hundreds of Nigerian victims and their families. This amount will sufficiently take into account individual harm suffered by victims.”

The SERAP deputy director said if the commission is seen to be demanding for payment of damages on their behalf, the victims would be discouraged from reprisal attacks.

“If the commission does not pursue a case for compensation for victims, the Nigerian government may compel it to do so before the court,” he said.

“The call for an effective remedy and reparation for the victims of xenophobic attacks and violence is overwhelming, and comes from direct victims and their families, from the Nigerian government and the leadership of Nigeria’s National Assembly.

“Pursuing the case before the African Court and seeking adequate compensation in the sum of $10 billion (USD) would help to ensure justice to the victims and deter South African authorities and high-ranking public officials who incite hatred, violence and discrimination.”