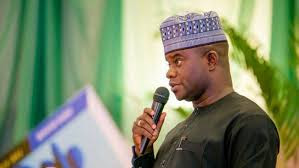 The Peoples Democratic Party is accusing Governor Yahaya Bello of Kogi state of being the mastermind of the gun attack at its governorship primary in Lokoja early on Wednesday.

Voting had ended and the sorting of the ballots had just begun when gunmen invaded the Lokoja Stadium, sending everyone scampering for safety.

Kola Ologbondiyan, the party’s spokesman, at a press briefing in Abuja today, accused Bello of sending the gunmen, stating that they were “Known APC faces”. He did not provide any proof to justify the accusation.

Ologbondiyan said his party had “a peaceful, decent, clean, clear, credible and transparent process” in the conduct of its primary.


“Accredited delegates had voted and the balloting had been concluded in a very orderly manner before the vicious attack by the gunmen, who were shouting pro-Bello mantra and accompanied by known APC faces”.

The PDP produced a photo-caricature of the Bello, holding a rifle menacingly and dressed in army combat uniform.

Governor Yahaya Bello is the official candidate of the ruling All Progressives Congress in the election, set for November.

The PDP claimed the resort to violence and bloodletting cannot save the failed governor and his party, as “the people of Kogi state are firm in the irreversible resolve to use every means available in a democracy to confront and vanquish APC’s evil plots ahead of the November governorship election.

“It is clear to all that Governor Yahaya Bello has become chaotic in the face of his rejection by the people as well as the soaring popularity of the in Kogi state, and has now resorted .to violence in a failed desperate attempt to prevent our party from presenting a candidate for the election.

“The PDP only has pity for Yahaya Bello and the APC because our processes are still intact and nothing can sway our resolve as well as strong will by the people of Kogi state to kick them out of office in November.

“This is more so as the attack has further united our governorship aspirants, critical stakeholders, leaders and teeming members and supporters across the state for a common front against Yahaya Bello and the APC”, Ologbodiyan said.