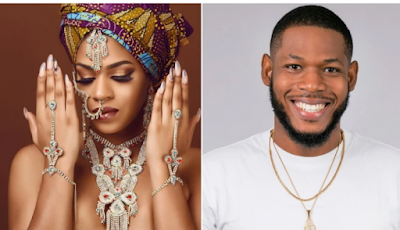 BBNaija housemate, Venita got into a fight with Frood today over what perceived to be Esther’s interference in their newfound friendship.

Are they having their first relationship fight though?
👀 #BBNaija https://t.co/Fs747giz42 pic.twitter.com/5QVSPgQdSI
— Big Brother Naija (@BBNaija) August 7, 2019


Trouble began for Frood when Venita went out to get a knife to share her burger with him. On her return, she found him talking with Esther, which made her sad.

So while the guys gathered to talk, Mike told Frodd that Venita was about to move her bed from his side because she saw him chatting with Esther.


Today's quote: "If I come to meet you, you can use me for your petty demonstration" - Frodd.


Obviously not willingly to ruin his newfound friendship with Venita, Frodd approached Venita to clear the air over the Esther drama.

Frodd felt Venita was overreacting  about the issue because he didn’t even know she was going to take it that personal. They went back and forth about the burger and Esther Incident for a while, trying to settle the rift amicably.