Buhari, Ramaphosa to meet over xenophobic attacks on Nigerians in South Africa 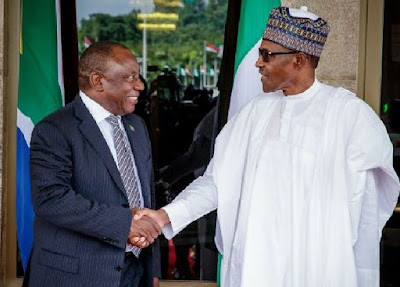 This was disclosed by the Chairman and Chief Executive Officer of Nigerians In Diaspora Commission (NIDCOM), Hon. Abike Erewa while briefing journalists in Abuja on Wednesday.

Apart from the xenophobic issue, she said that the two leaders meeting in Abuja will also dwell on other bilateral issues that will strengthen the relationship between the two countries.

Stressing that the xenophobic attacks in South Africa have reached an alarming level, she said that decisive action must be taken to avoid a further generation.


According to her, Nigeria’s Minister of Foreign Affairs and that of South Africa will also meet as soon as the new cabinet of President Buhari is constituted.

She said they will continue with earlier diplomatic policy discussions on how best to tackle the tension created as a result of the xenophobic attacks on Nigerians living in the country.

As a way forward, she also demanded full investigation into the xenophobic cases in South Africa.

She said: ”Eight policemen are currently being investigated in South Africa for their involvement in killings against Nigerians, that investigation must come to an end and there must be consequences for their actions.

”The two policemen that did this to Tayo are already being investigated by investigating body that deals with police officers in South Africa, we must know the outcome of the investigation.

“We also must know who killed Mrs. Elizabeth Chukwu who went for a conference and died in her hotel room.

”We know that every country has their own challenges, we have ours and they have theirs. But killing other people is not the solution to anything. If a Nigerian commits a crime you deal with the person.

”And like Tayo said, we just have to put an end to xenophobia in Africa. It is a shame that in the 21st century we are talking about Africans killing Africans, rather than talking of Africans going to the moon, doing inventions, taking over the world. This cannot be called to happen, ” she added.

At the press conference tagged ’Enough is Enough, also attended by the leadership of National Association of Nigerian Students (NANS), Abike declared Faniron Tayo as the champion of xenophobia Africa.

”So Tayo, maybe we will call you the champion of an end to xenophobia.” Faniran, a Big Brother Africa (BBA) star was recently brutalized in the South Africa.

NANS through its President, Danielson Akpan, issued seven ultimatum for South African businesses in Nigeria to leave the country.

He also called on Nigerians in South Africa to return to Nigeria.

But Abike declared that the issue has not got to that level and would be handled by the leaders of the two countries.