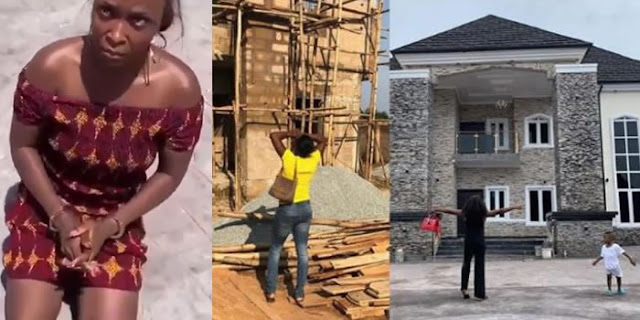 Controversial Instagram blogger Blessing Okoro in a new LIVE video on Instagram alleged that Onye Eze, the real owner of the house which she claimed she built on her birthday sent his boys (thugs) to arrest her and not the Police.

In this never-ending property saga, Blessing Okoro alleged that Onye Eze called her to invite her to his house, she had no idea what was going to happen there but on getting there, his boys arrested her and handcuffed her. She says no Police officer did that to her but his boys.

The BOM (Break up or Make up) CEO explained the ordeal she went through amidst tears, blaming Onye Eze and his boys for what she is being put through on social media. She went on to say her life is being threatened.

Blessing likened what she was going through on the internet to death, saying she therefore preferred to speak up about this ordeal than staying silent as she is being murdered on the internet.

Watch the new video she made below.


NigerianEye recalls that Blessing Okoro was arrested by Billionaire Onye Eze, the owner of the house she claimed belongs to her, a few days ago. (Blessing had earlier falsely bragged that she owned the house, to deceive her fans on social media)

A video however surfaced on the internet showing her on her knees, handcuffed and confessing she does not own the house but only came to take pictures there to claim ownership online.