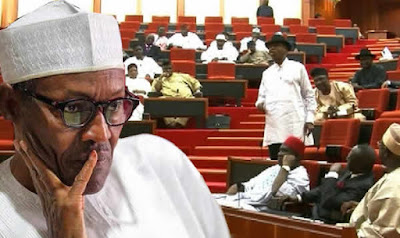 President Muhammadu Buhari on Monday night advised senators-elect on the platform of the All Progressives Congress (APC) to avoid the erroneous path of 8th Senate.

He gave the advice while hosting the APC senators-elect and some state governors to a dinner at the Presidential Villa, Abuja.

The President regretted some wrong actions and decisions of the 8th National Assembly.

He specifically recalled the deliberate and persistent delay in passing the nation’s annual budget by the National Assembly.

Urging the in-coming 9th National Assembly to do things differently from the outgoing 8th Senate, he said that it will enable his administration achieve its target of transforming the nation.

He said “This is my fifth and last time of standing for an election – for that reason I’ll like to leave something behind.


“And what I want to leave cannot be successfully done without your support.

“So, that is why I’m appealing for your support. What happened in the last senate and so on is regrettable because I still feel it shouldn’t take seven months to pass a budget. You have a very, very serious job ahead of you.

“So, what I’m appealing is that any major decision you are going to take please reflect more on the country than yourself as a person – what effect will it have on the country,’’ he said.

Promising to work and partner with the 9th national assembly in promoting peace, stability and economic prosperity in the country, the president thanked the governors and senators-elect for their support and understanding.

Speaking with State House correspondents at the end of the dinner, the National Chairman of the APC, Adams Oshiomhole, said the whole purpose of the event was to bond the new and old senators, to establish a new relationship between the executive and the legislature.

He said: “The system talks about the separation of powers between the executive and legislature and the two must handshake for things to happen.

“And when you have a president that is determined to drive changes, fundamental changes that will affect our habits, our life style, review the economy, deal with the security situation, fight corruption as fiercely as he is trying to do, he will need a very supportive legislative arm of government.

“And happily, the Nigerian people have given us the number in the legislative arm of government.

“All we have agreed today is that we will use these numbers as a functioning whole to determine the leadership of the senate in a way that we are not going to go to the floor of the senate and allow the opposition dictate who becomes the senate president.

“Because, we have comfortable majority to drive that, what we have to do is to manage that majority.’’

Also speaking on the outcome of the meeting, Plateau State Governor, Simon Lalong said: “What the president has done today, I think is the right step in the right direction.

“The last time we did not have the opportunity of this politics but today, Mr. President invited us. Because, we are governors and we also dialogue with our senators.

On his part, Zamfara State Governor, Abdulaziz Yari said “We all remembered what happened at the last assembly, and Mr. President through the national chairman said that we should work hand in hand to ensure that we come out as one party.

“We are assured the President that we are going to give him full cooperation to ensure we boost the Nigerian economy, security and fight against corruption.”