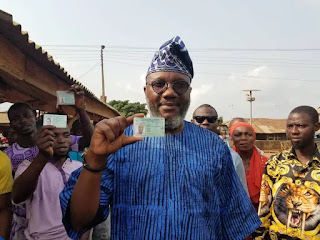 The governorship candidate of the Allied Peoples Movement in Ogun State, Adekunle Akinlade; and his party have hired Dr. Onyechi Ikpeazu, SAN, as their lead counsel for their petition at the election tribunal.

Ikpeazu was the lead counsel for the Peoples Democratic Party candidate in the 2018 Osun governorship election, Senator Ademola Adeleke.

Ikpeazu, on behalf of Akinlade and the APM in the state on Tuesday, urged the Governorship Election Petition Tribunal in Ogun State to give an order mandating the Independent National Electoral Commission to grant them access to the documents used for conduct of March 9 election in the state.

The motion, which was filed by Ikpeazu, SAN, was supported by five-paragraphs affidavit and a written address.

Ikpeazu will be leading other three SANs — Mamman Osuman, Sebastine T. Hon and Ahmed Raji, alongside other 12 lawyers.

In the motion ex parte, Akinlade and the APM are the first and second petitioners, while INEC, the All Progressives Congress and its candidate, Dapo Abiodun, are first, second and third respondents respectively in the application.

The petitioners in the motion ex parte marked EPT/06/GOV/01/2019, said the inspection became imperative to allow them institute a petition before the Tribunal.

The INEC had declared Abiodun winner of the March 9 governorship election in Ogun State, having polled 241,670 votes to defeat his arch-rival and candidate of APM, Akinlade, who scored 222,153 votes.

While filing the application on 11 grounds, the petitioners submitted that without a formal order from the Tribunal, the respondents would not avail them the required documents for the purpose of instituting their petition.

The documents sought to be inspected, they said, “are indispensable for the purpose of instituting and maintaining the said petition.”