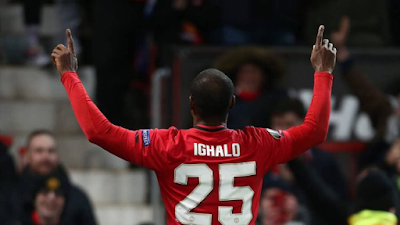 Ighalo had already taken to social media to bid his parent club goodbye, after Shenhua gave him permission to speak with the Saudi Arabian side.

Al-Shabab are currently top of the Saudi Professional League, just past the halfway stage of the season. They are looking to win their first league title since 2011/12, with Ighalo a welcome capture.

He will link up with Argentina international Ever Banega, who joined from Sevilla at the end of last season, as well as former Real Betis and Wolves midfielder Alfred N’Diaye.

The former Watford and Granada striker scored five goals in 23 appearances after arriving at Old Trafford on deadline day in January 2020, but made just four appearances for the Red Devils this season.

Despite enjoying praises from Ole Gunnar Solskjaer during his first loan spell, his quest for more opportunities diminished following the arrival of Edinson Cavani in October.

A former U-20 player, Ighalo scored 16 goals in 35 appearances for Nigeria before calling time on his international career in July 2019.

He produced seven goals to finish top scorer in the 2019 Africa Cup of Nations qualifying series and his five goals and one assist helped him claim the Golden Boot and fired Nigeria to a third-place finish at the tournament proper in Egypt.