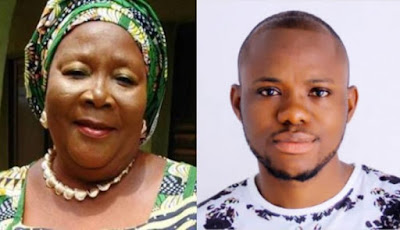 Morenike Sulaimon, veteran actress better known as Mama Ereko, has cursed Jamiu Azeez over claims by the actor that she stole the storyline for ‘Oko Ramota’, his forthcoming movie.

On Saturday, Azeez took to his Instagram page to share an emotional video wherein he alleged efforts by Mama Ereko to steal his concepts.

The film star based his argument on Mama Ereko’s choice of Aunty Ramota, an Instagram sensation — who featured in his yet-to-be-released project — for her own forthcoming movie.

“This past few weeks had been difficult for me. I have cried till I got an eyesore. I don’t know why people envy the success of their fellow humans. I have produced a lot of movies but the latest film titled ‘Oko Ramota’ is the loudest of all. I put all efforts In order to publicize the movie,” he said.

Azeez also explained that he invested a lot into producing the forthcoming project including selling his land.

“I fought a lot of battles to ensure the success of this film. I sold my land because of this movie. I had to borrow money from unlikely people. Unfortunately, you produced the concept, invited Aunty Ramota for the production of the same movie,” he added.

“You gathered the concept from the clips and snippets I posted on social media and wrote a story about around It. My Industry people, have mercy on me. Don’t spoil my efforts.”

But reacting on Sunday in a video shared on the same platform, Mama Ereko dismissed the allegation against her while she also cursed Azeez for accusing him of such.

The 70-year-old said although she had the intention of also featuring Aunty Ramota in her movie titled ‘Ile Imo’, the shooting has not commenced.

Ereko said she had earlier reached out to Azeez to curse those attempting to sabotage his efforts after his video went viral not knowing she was the one being accused.

“If indeed I stole ‘Oko Ramota’s concept, may l not succeed in whatever I lay my hands on. But if that’s not the case, yet he keeps tarnishing my name, God will destroy him from this earth to heaven. Are you mad? I so much love you but now you’ve disappointed me,” she said.

So far the president of TAMPAN, Mr Latin, has waded into the situation and he has ended the rift.

The 54-year-old actor shared a video of himself, Azeez and actor Sisi Quadir explaining that the situation has been clarified in an Instagram post on Monday. He said Azeez and Mama Ereko had a misunderstanding and they have settled it.

Jamiu also reposted the video and thanked Mr Latin for his intervention.

“Thank u so much daddy,” he wrote.