Ogun at 45: Abiodun speaks on Amosun, Daniel, other former governors 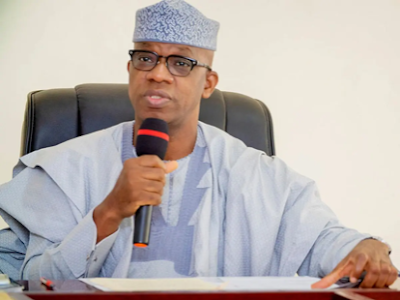 As Ogun State marks 45th anniversary, Governor Dapo Abiodun has taken a look into the contributions of his predecessors to the development of the State.

Abiodun recalled that on February 3, 1976, the then Military Head of State, Late General Muritala Muhammed, made a nationwide broadcast to announce the creation of Ogun State.

The Governor, while congratulating the people of the Gateway State, appreciated the contributions of the founding fathers and mothers, whose efforts he said culminated in the creation of the State.

Speaking on the contributions of his predecessor, he said, “Senator Ibikunle Amosun, my immediate predecessor in office and the fourth civilian Governor of the State approached the task of governance with zeal and determination to consolidate the gains of the past and chart a course for further infrastructural development of our dear State.”

Speaking about other former governors of the state, Abiodun said, “I cannot but thank all my predecessors, the military governors, administrators as well as the democratically elected governors, their Deputies and Commissioners, who have had the good fortunes of steering the ship of our dear State, from the then Lt. Col. Seidu Ayodele Balogun who had the distinction and responsibility of being the first person to administer the new born State. A solid foundation was laid on which all of us continued to build on.

“Brig. Gen. Harrison Eghagha (Rtd.), the second military Administrator continued with the tradition and facilitated the enabling environment for the effective take-off of the Democratic governance till October 1, 1979 when Chief Victor Olabisi Onanbanjo was sworn as the first democratic Governor of our dear State.

“Governor Onabanjo, a renowned journalist, deepened the tradition of education especially in the area of implementing the free education policy of their party, the Unity Party of Nigeria (UPN). Brig. Gen. Oladipo Diya, the first indigene of the State to be appointed as military Governor strengthened social order and brought a sense of urgency to the development of our dear State. Col. Oladayo Popoola he also deepened the legacy he inherited from his predecessors.

“Col. Raji Rasaki despite being a military Administrator engendered inclusiveness by engaging stakeholders in the administration of the State. Navy Capt. Muhammed Lawal also did his bits and handed over to Navy Capt. Oladehinde Joseph, another Naval officer. Chief Olusegun Osoba, a renowned journalist, in his first coming, opened a new vista in the development of Ogun State.

“Akinrogun’s tenure remains a reference point in rural development in the history of our dear State. Lt. Col. Daniel Akintonde also pushed the frontiers in the development of Ogun State before handing over to Group Capt. Sam Ewang. Ewang’s tenure will be fondly remembered for the housing estate for workers aptly named after him, Sam Ewang Estate.

“Navy Com. Kayode Olofinmoyin took over and had the distinction of presiding over the transition that led to the next democratic dispensation that ushered in Chief Olusegun Osoba’s second coming which also marked another remarkable achievement in governance and delivery of democratic dividends.

“Otunba Gbenga Daniel took over and his tenure will be remembered for the rapid industrialisation and economic development especially blazing the trail of the increase in the Internally Generated Revenue (IGR) of the State. To all of you, once again, on behalf of the Government and the entire people of Ogun State, I say thank you,” he said.

Abiodun added that Ogun State sons and daughters have continued to blaze the trail in all fields of human endeavours in Nigeria.

With a humble beginning in 1976, Abiodun said Ogun has grown to become one of the most viable States in Nigeria.

“We are the leading State in the production of limestone, granite, glass-sand, etc. This is corroborated by the records of the Nigerian Bureau of Statistics (NBS) in its 2019 report which states that Capital importation into Nigeria amounted to 5.3billion US Dollars, and Ogun State ranked 3rd only behind Lagos and Abuja in the destination of these investments.

“With only one university in 1982; the then Ogun State University, now Olabisi Onabanjo University (OOU), Ago-Iwoye, having just over 500 students, we have grown to become the education capital of Nigeria with 26 tertiary institutions.

“This is not to forget that we are also the spiritual headquarters of Nigeria with almost all the denominations and societies of our religions having their headquarters in our dear State,” the governor said in a broadcast on Wednesday.