#OccupyLekkiTollGate: Nobody will bring Lagos down -Sanwo-Olu’s aide reacts to planned protest 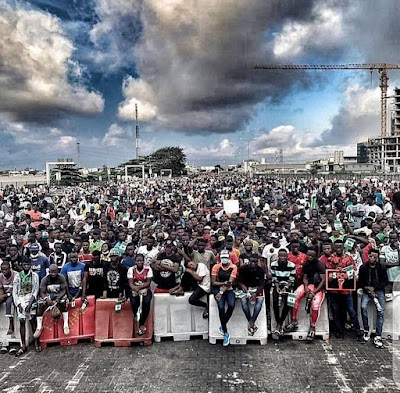 The Chief Press Secretary to the Lagos State Governor, Gboyega Akosile, has reacted to the planned protest slated for Saturday, February 13, 2020, against the reopening of the Lekki tollgate in the state.

The organisers of the protest are angered by a ruling for the tollgate to be reopened as issued by the Lagos State Judicial Panel of Inquiry and Restitution for Victims of SARS Related Abuses.

The control of the tollgate, which was the epicentre of the October 2020 #EndSARS protest against police brutality and bad governance in Nigeria, was ordered to be returned to the Lekki Concession Company.

The tollgate had been away from the control of the LCC since the incident of October 20, 2020, which allegedly saw soldiers of the Nigerian Army open fire on the #EndSARS protesters.

Not pleased by the panel’s decision, some Nigerians on Twitter threatened to occupy the tollgate on Saturday to express their displeasure.

Reacting to the planned protest, Akosile, in response to a tweet with the hashtag #DontLetThemBringLagosDown, said “nobody will bring our dear Lagos State down! Their rights end where other people’s rights begin.”

Lagos State had witnessed the destruction of public and private properties during the #EndSARS protest, before and after the alleged Lekki tollgate shooting by soldiers.