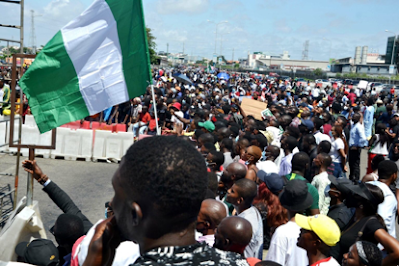 The initiator of #DefendLagos, Alabi Oladimeji, has announced the withdrawal of planned counter-protest expected to hold at the #Lekkitollgate today (Saturday).

Oladimeji said this at a press conference hosted on his Facebook page.

According to him, the decision to suspend the planned protest was made after the federal and the state governments’ assurances that no protest would hold at the toll gate.

Two opposing groups #OccupyLekkiTollGate and #DefendLagos had announced plans to hold separate protests in Lagos State on Saturday despite warning from the government.

On Friday, trucks of police officers were deployed to Lekki toll gate ahead of the planned protest.

Oladimeji, however, warned that the group would organise a “massive” protest if #Occupylekkitollgate protesters are allowed to hold theirs.

He said, “No protest from #DefendLagos today. I am proud to announce that for the main time, we will be suspending this protest due to the law of the Federal and state governments. We are law-abiding and good citizens and should not be seen disobeying the law.

“In respect of the President, Muhammadu Buhari, and Lagos Governor Babajide Sanwo-Olu. I am now announcing that anyone involved in #DefendLagos initiated by me should immediately suspend the protest.

“If the federal government and Lagos fail us, we will troop out in a large crowd and protest on Monday.”

He noted that though the decision is depressing, the plan to protest was never for personal benefits but to ensure that no destruction occurred in Lagos State.

“It is depressing news for me because we have planned and invested our resources to produce banners, posters, etc but this is not an avenue for us to make money like those in the OccupyLagos,” he added.

The #DefendLagos campaigner told the government to arrest anyone that contravened the directives stopping protests in the state.