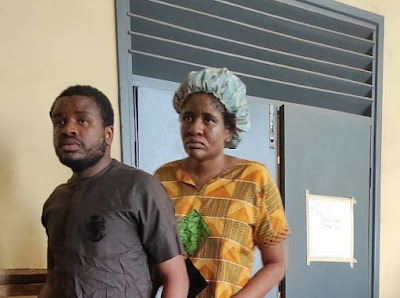 Ifezue Chiamaka and Ifezue Emeka, two siblings, have been arraigned before a magistrate court sitting in Enugu over the alleged murder of Ijeoma Nweke, a makeup artist.

Chiamaka was alleged to have conspired with her brother to kill Ijeoma, a graduate of Imo University (IMSU), for “having an affair with her boyfriend.”

It is understood that Chiamaka allegedly lured Ijeoma to a yet-to-be-identified place with the promise of giving her a makeup gig.

While suspecting foul play, it was gathered that Ijeoma immediately sent a message to a friend before being forced to drink a poisonous substance.

The siblings were also alleged to have poured a substance believed to be acid on the deceased’s body.

It was gathered that the deceased went missing in November 2020 after taking an order for a make-up session.

This had prompted anxiety on social media after friends and family members took to Twitter to seek details about her whereabouts.

During the hearing of the case on Wednesday, an eyewitness told the court that he saw Chaimaka’s brother allegedly pouring acid on the deceased’s body after they dumped her corpse at the Maryland axis of Enugu Metropolis.

The deceased’s boyfriend was also present at the court and reportedly reiterated his willingness to testify against the two siblings.

The case was adjourned till February 24, 2020, for further hearing.

The development has since ignited reactions on social media, with many Nigerians calling on authorities to ensure the perpetrators are brought to book.

Joining the fray, Mercy Eke, a former BBNaija housemate, described the deceased as her coursemate. She added that Ijeoma was one of the best students in her department during her time in school.

“Ijeoma neke was my coursemate a very brilliant young woman, she graduated with a 2/1. ijeoma was one of the best in my department( psychology Dept .2010/2014) we always tease each other and I will tell her “girl you must work in my rehabilitation center,” she wrote.

“And she will say mercy this department doesn’t fit you and we will laugh over it, when I heard she was missing we hopped and prayed they find her alive, my heart is pleading we want justice, just must be served.”

Ijeoma neke was my coursemate💔a very brilliant young woman, she graduated with a 2/1. ijeoma was one of the best in my department( psychology Dept .2010/2014) we always tease each other and I will tell her “girl you must work in my rehabilitation center 💔#JusticeForIjeoma

Here’s what other Nigerians had to say:

Ijeoma was my Senior colleague during my university days in Psychology department Imo State University. Such a wonderful and beautiful soul. She doesn’t deserve to die this way #JusticeForIjeoma

May the soul of Ijeoma rest in peace. May God comfort her family. No parent should have to go through this. #JusticeForIjeoma

I've been reading this #JusticeForIjeoma story since morning and I'm just so weak that I'm numb.

Humans have shown that the devil is a learner. Even the Devil wouldn't do this.

I hope they get the death penalty & spend the next 30 years on death row before they are hanged. pic.twitter.com/biY82HTVGF

This is the video of the brother and sister alleged to have killed Ijeoma Nweke, a Make-up artist based in Enugu...#justiceforijeoma

Stay with @realJ101 for the details

I really feel so sad for the family of Ijeoma at a time like this. Those siblings that did this to her should rot in jail. She doesn't deserve this #JusticeForIjeoma pic.twitter.com/j9ZDZeVf5X

This Ijeoma story just shattered my heart a million times.

How can a man help his sister kill another woman (Ijeoma) just because she's dating his sister's boyfriend? Why didn't he talk the sister out of such evil? This is painful. 💔#JusticeForIjeoma pic.twitter.com/9vOnFQRuyM

If this other lady goes to prison now or is sentenced to death, the guy continues with his life.

See en, anything that happens, always learn to move on. Fighting over a man/ a woman or the likes doesn’t worth it.

Ijeoma Nneke whom I fondly call Ijeomi or My IJ has been special to me from her days in imsu to her relocatin to Enugu bc of NYSC & staying back in Enugu to be a MUA after NYSC till her num. went off since 16th Nov. 2020, her Killers will never go unpunished #JusticeForIjeoma 💔 https://t.co/b6SZbleUUL

How can those children of the devil kill this beautiful gal because of man 💔💔💔 she didn't deserve this OMG. Seeing her moms video is heartbreaking. May God comfort their family. #JusticeForIjeoma pic.twitter.com/iTUg7yyMqe

Ijeoma Nneke was one of my best of all time, no sentiments attached!
She was hungry for knowledge and proved her qualities in my Research and Statistics classes!
I had hoped to see her at the top someday but now this...#JusticeForIjeoma