Gov. Akeredolu orders probe of Ondo's chief judge as her brother accuse her of illegal detention 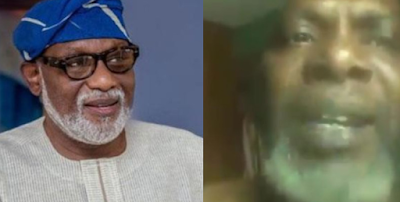 Governor Rotimi Akeredolu of Ondo State has ordered a probe of the Chief Judge of the state, Justice Olubunmi Olateru-Olagbegi,  for allegedly detaining her half brother, Olupelumi Fagboyegun, for three years.

The probe is sequel to a viral video in which Fagboyegun accused the chief judge of causing his arrest and detention because he went to their father’s home.

He subsequently called on Nigerians to come to his aid as there was no way he could get justice in Ondo State.

Fagboyegun said, “I am calling on you to rescue me from the Ondo State judiciary which is being run as a family affair that if you don’t know anybody, you cannot get justice. I have been living abroad for over 30 years.

“Even if I was convicted of this crime, it only carries a one-year prison penalty but I have been on open remand for the past three years. The case has been on for three years because the Chief judge of Ondo State influenced the judicial system and I have been unable to get justice.

All efforts to reach the CJ was unsuccessful but the state governor, Rotimi Akeredolu has instructed the state Attorney-General and Commissioner for Justice to investigate the allegation tabled down.

Akeredolu in his Twitter handle said, “I have instructed my AG to investigate the allegation. We will ensure the investigation is thorough, fair and transparent.”