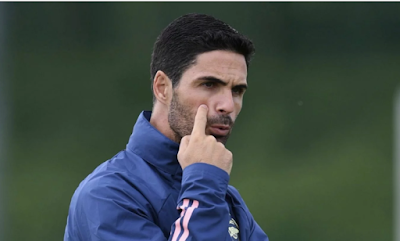 Arsenal manager, Mikel Arteta, has explained why he was shouting a lot at his players from the touchline during their 1-0 defeat to Manchester City on Sunday.

Raheem Sterling’s header in the second minute proved to be the winner at the Emirates Stadium.

Speaking after the game, Arteta defended his vocal approach, as Arsenal players struggled to create against City.

“Every movement, every detail, every position is key.

“The moment we don’t get it, they’re going to exploit it straight away and they are going to make you look like a poor team.

“Probably I do it too much. I don’t know, but I think it’s very necessary for them that I give them guidance. I can see from the outside what they are going to do and when you are there at 100mph you lose a second or two and with them, that’s a huge amount of time,” Arteta said.

Arsenal remains 10th on the Premier League table and now faces Benfica in the Europa League on Thursday, having drawn the first leg 1-1 last week.