Nigerians blast Defence Minister for his controversial comments about self-defence 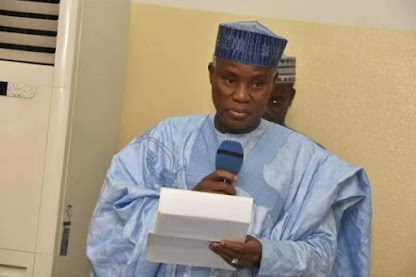 Maj. General Bashir Salihi Magashi, Nigeria’s defence minister has come under fussilade after his gaffe that Nigerians should defend themselves when attacked by bandits.

He was speaking today following reports that 42 people, including 27 students were kidnapped by gunmen in Kagara, Niger State.

In a trending video, Magashi said it is not the sole responsibility of the military to fight bandits.

He said it is the responsibility of all

He wondered why Nigerians run scared after bandits or terrorists release some staccato of gun shots in the air.

“We should not be cowards. We should stand back and fight”, he said.

“At times the bandits will come with three rounds of ammunition. When they fire shots in the air, everybody will run.

“In our younger days, we tried to fight any aggressor.

“I don’t know why people are running away from minor things like that. They should stand and fight.

“And let these people know that even the villagers have the capacity to defend themselves”.

Some Nigerians were so annoyed by Magashi’s statement that they called for his resignation, as he has proven a failure in his duty as defence minister.

Here are some reactions by Nigerians:

Yes ooo!!! We will defend ourselves don't worry. We have Eba tuner and slippers. Them go hear from us... Eleribuu!!! After guarding yourself with the best of our armies abi? Abi kaada fun man yi ni. Defend with what now. Like tiktok uptimous prime?

This man is the Minister of Defense! This speaks volume about the level of governance we have in this country. Terrible!!!

This country is heading in the wrong direction. How can a minister of defense make this kind of statement? So is he referring to Nigerians as being lazy or what? See who we call defence minister? Am tired of this country...

I think the Minister of Defence wants to chase clout. What is we should'nt be corward? Life is priceless, you can't tell an armless civilian to confront a bandit holding RPG/a powerful weapon.

Buhari's Minister of Defence is saying people shouldn't be cowards,they should stand up to bandits..I'm so shocked I don't know what to say.

Minister of Defence wants us to defend ourselves from bandits, like we've not been doing that with the police and the bandits.

So the Minister Of Defence wants us to defend ourselves without any weapon against the terrorist bandits with RPG.?? I don't even know what kind of people we have as leaders, like how tf you guys want us to confront those terrorists holding RPG & AK-47.?? #SecureNigerState

Buhari's Minister of Defence is saying people shouldn't be cowards,they should stand up to bandits..I'm so shocked I don't know what to say.