‘Controversial pastors’ on the rise in Nigeria amid economic hardship 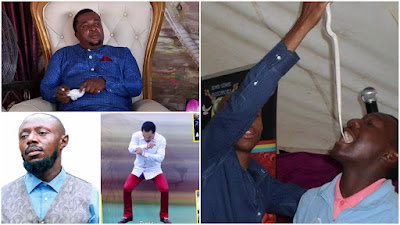 As the activities of self-proclaimed men of God and prophets remain on the rise in Nigeria, some concerned Nigerians are worried about the true status of these acclaimed ‘men of God’. While adherents and supporters of some of the pastors believe they are as real as ‘God Himself,” others have kicked, saying they are fake and only after fame and money.

Nigeria, known for proliferation of churches tolerates all kinds of religious practices with little or no regulation in place.

Many Nigerian pastors have been accused of deviating from their true calling, and are focusing more on enlarging their personal ministry, influence and wealth with no regard to public criticisms.

The allegation had led to the ‘tithing’ controversy by some Nigerians and On-Air Personality, OAP Ifedayo Olarinde a.k.a, Daddy Freeze which stirred diverse reactions amongst Christians.

Freeze, a staunch critic of payment of tithe and offerings in the Church had challenged popular pastor and General Overseer of the Redeemed Christian Church of God, Enoch Adeboye to a debate on the issue.

He maintained that “Tithe is a false doctrine for Christianity and Christ never collected tithes, neither did his disciples.

The issue of Tithing was also criticised by an acclaimed Anambra prophet, Odumeje who said God does not need tithe.

According to him, asking church members to pay tithe is ‘criminal.’

But tithing is only an aspect of many questionable things that go on in churches unchecked.

Recently, some pastors have emerged, focusing their activities on controversies such as spraying of money on their followers, allegedly raising of dead people, and performing many miracles, the type not seen even in the Old Testament.

The activities of these pastors have raised serious questions as to the true meaning of the Gospel.

Chukwuemeka Odumeje, popularly known as Indaboski or ‘liquid metal’ is known for the display of wealth and equally fond of performing miracles, dancing and attending events where he sprays money on his followers. The Prophet has also released a song with Flavour and engaged in all kinds of secular practices.

There have been rumors that the source of power of the controversial prophet is from India. But the acclaimed prophet had challenged anyone with proofs to come forward, claiming that he got his power from God.

In the case of Onyeze, the prophet had described himself as “The only one that can give you the wealth, health and other things you want,” and like an advertised business, he said “Just contact me today”.

Recently, Onyeze stirred reactions after he appeared in a viral video throwing a lot of Nigerian currency into the river and compelling his adult followers, both male and female, to bathe naked in a river.

He also planned to perform a ritual to raise seven corpses back to life which got the attention of the Anambra government and the Nigeria police.

The government warned against his planned ritual and directed hospitals and mortuaries not to let him into their facilities.

The prophet who was arrested days ago also received backlash from Nigerians who queried his acts and accused him of disguising as a man of God.

Many Nigerians say these prophets are fake and just using Christianity to cover up their diabolical acts.

Many have claimed that the South East, and particularly Anambra State is gradually becoming a breeding ground for fake pastors.

Recall that Reverend King who was sentenced to death in 2017 was from Anambra. He was found guilty of killing a church member, Ann Uzoh.

According to him, ”Truth is that these prophecies are mere projections and no right-thinking follower should be bothered about them. Just worship your God and stop looking at your pastors’ prophecies.”

Recall that it’s now traditional for many pastors to release their end of the year prophecies which reveal what Nigerians should expect in the coming year. Many of these prophecies have been criticized by some Nigerians and the government. The presidency had tagged all the prophecies on President Muhammadu Buhari and Vice President, Yemi Osibanjo as ‘fake.’

Charlyboy, AKA AreaFada and Falz, have been at the fore-front of the campaign against fake pastors in Nigeria. They had recently released a song titled ” God of Men,” where they exposed the antics of pastors and fake prophets.

Nigeria as a country has the richest pastors in the world, yet its citizens are the poorest globally. The country’s economy is at a struggling pace.

But some Nigerians who spoke to our reporters had these to say about tithing and fake pastors.

Azendeh Obi said, There are many fake prophets and pastor’s in Nigeria professing ‘nonsense’ and claiming that God sent them. As believers, we ought to be careful and mindful of people disguising to know the Bible. We were warned about some many things happening now.”

Emelda Uchenna, “I know there are real men of God in this country, but honestly the fake ones are gaining grounds and spreading lies, very soon, God will expose them, all the Yahoo Yahoo Pastors and fake Prophets milking Nigerians in the name of tithes and offering in the church will be exposed.

Elder Chidi said, “During the ASF pandemic, a lot of my friends and colleagues lost their farms to the flu. Farms around me too. Almost every farm I know in Umuahia. But God kept mine. We kept increasing as people folded. I am not saying I am better, but God loves me and I pay my tithe also. If you don’t believe in tithing, no wahala. Pease allow those of us that believe and pay to pay in peace. The essence of tithe is the belief in the faithfulness of God to honor his word and not in your pastor whether ‘him chop am or not’. My name is Elder Chidi and I pay my TITHE.”

Ella said, “Tithing is the biggest fraud against Christ teaching. It was meant for a particular lineage in the Old Testament era. Christ came and abolished it. If you believe tithing is right, then Sharia law is right. They were made at the same time.”

Similarly Hanson Omah said “Being a practicing Christian changed my life immensely. I now worry less, I don’t stress to make a living. Feeding three times daily is no longer a goal. I moved from being a chronic receiver to a lavish giver. My tithing moved to an incredible level, what I do with my money is nobody’s business.”

@Clement: “Indaboski just swindles people money in the name of Christianity and cannot be seen as Rev. King.”

@OkeydeGeneral “ I wonder how people believe that these native doctors are pastors.Anambra state nawa oh, from Rev King to Eddy in Nawgu, to more recently Odumeje, and Onyeze Jesus.”

@Ujay148 “ Is it not better that these men answer chief priest with their full chest? Why call themselves pastors and men of God when they are not.Just negodi.”

@Jaqualine “ CAN need to start compulsory registration of all ‘churches’, all these is nonsense Christianity?

@GreatAtagana “ In the 90s there was Professor Moshood Abiola Peller a renowned magician who never shy away from his profession. Now you don’t see any magician on street but you can find them all on the pulpits performing abracadabra and cheap parlor tricks. Pastor magician Onyeze Jesus indeed.”

@EzePatrickTwit1 “You see that Man called ONYEZE JESUS (AKA.EkELU OLU EKE). God will use his end which will soon come to expose some so call men of God in Nigeria whom people will never believe they are into diabolical. Mark this.”