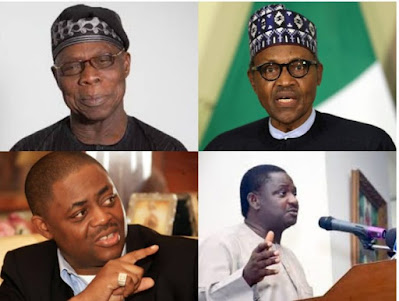 Critic, Femi Fani-Kayode has said comparing former President Olusegun Obasanjo with President Muhammadu Buhari is like comparing the living to the dead.

Fani-Kayode was reacting to comparison drawn between Obasanjo and Buhari by the Special Adviser to the President on Media and Publicity, Femi Adesina in his article, titled: “The Priest and the President.”

Adesina had said “Buhari elevated the CAN Chairman OBJ described as a total idiot.”

In the article, Adesina narrated what transpired in 2004 when the lands of Yelwa-Shendam, in Plateau State, had turned crimson.

Adesina said while the place was turned into killing fields, the then President Olusegun MATTHEW Obasanjo (emphasis on that middle name) visited, and met with the different stakeholders.

“During the dialogue session, the then Chairman of Christian Association of Nigeria (CAN) in Plateau State asked a question the President found offensive. And the Owu man, a retired Army General, flew off the handle. He let out this fusillade: “What role have you played to bring about peace as CAN Chairman in Plateau State? CAN, my foot! What kind of CAN Chairman are you? Did your own Christianity teach you about revenge? You are an idiot. A total idiot. And I have no apologies for that.”

“Pin-drop silence. Strange things do happen in Nigeria. But it had never been seen like that. For a father of the country to publicly excoriate a religious leader? For a Matthew to call a preacher an idiot, “a total idiot?” It was sacrilege walking on two legs. And again, for a President, who laid claim to being a born again Christian, to denigrate the association of his own faith? “CAN, my foot!” It was the height of it,” Adesina said.

Adesina added: “Well, the saga ran for a while. The man in question, Rev Yakubu Pam, said security agencies summoned and asked him to apologize to the President for the public spat. Insult on injury! The two men continued with their public lives. Obasanjo finished in office, and went on to take a degree in Theology. I’m sure he now knows better about those the Holy Bible says “speak evil of dignities” (2 Peter 2:10), and the consequences. I believe he has privately repented.

“Rev Pam finished his term as CAN Chairman in Plateau State. He went on to become Chairman of CAN in all North Central states from 2008 till 2015, and then, Chairman CAN in the 19 Northern states and Abuja, till July 4, last year, when he was named Executive Secretary of the Nigerian Christian Pilgrim Commission (NCPC), the regulatory body for Christian pilgrimage in the country.

“A tale of the priest and two Presidents. Publicly flagellated by one, a Matthew, and now, honored by the other, a Muhammadu. What Rev Pam didn’t get from a Christian, he got from a Fulani man from Daura, a Muslim. Is there any lesson we can learn from this? Think about it.”

“No CAN Chairman was ever abducted for ransom by bandits under Obasanjo. Comparing OBJ to Buhari is like comparing the living to the dead.