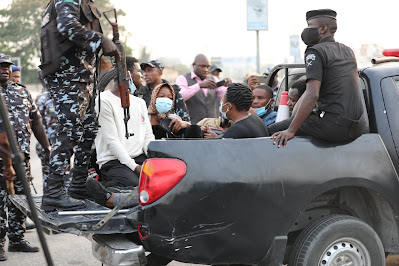 More protesters have arrived at the Lekki tollgate to express their dissatisfaction with the ruling of the Lagos State Judicial Panel of Enquiry on the reopening of the toll gate.

Soldiers had on October 20, 2020, fired live ammunition at #EndSARS protesters at the Lekki toll plaza, leaving many injured.

The new protesters, who were led by an activist, Dabira, were arrested after arriving at the venue.

Though a few of them initially resisted the arrest, the security operatives overpowered them.