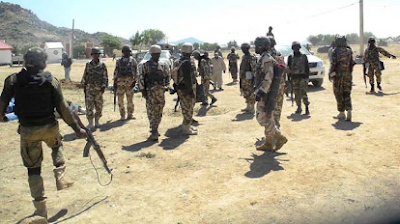 Nigerian Troops have successfully charged through Marte, killing scores of ISWAP/ Boko Haram Terrorists who laid siege in that area for some days.

Marte is a local government area in northern Borno state, which has been in the hands of Boko Haram fighters since taken control last week.

The local government is about 120 km from Maiduguri, the Borno state capital.

The taking over of Marte by the Nigerian troops today was in response to the order given by the Chief of Army Stsft, Lt General Ibrahim Attahiru during his visit to Army Super Camp 9 in Dikwa where he gave an ultimatum to troops to retake the area in 48 hours.

Troops have successfully and safely detonated series of IEDS laced along the routes and finally dominated the general area.

“New Marte effectively in our hands since 3pm. Our will and determination are unshaken. We are ever determined not to let our service chiefs and the nation down,” Troops said.

Meanwhile, there is a report of bomb explosion around Kangarmaka area of Maiduguri, the Borno state capital this evening (Tuesday).

Residents of the area said the bomb explosion claims many lives, however, there was no security confirmation on the casualty.