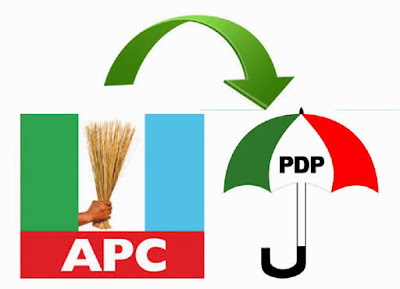 The All Progressives Congress, APC, Edo State has lost two members of the House of Assembly.

Speaker of the House, Rt. Hon. Marcus Onobun, during the house sitting on Monday read their letters of resignation from APC on the floor of the house.

According to Yekini Idaiye’s letter; May I use this medium to inform you of my resignation as a member of APC.

“I took this decision because of internal crisis in the party from my ward to the local government level which led to the factions in the party for some time now.

“It is on this note that I have decided to resign my membership of the APC and officially defect to the PDP.”

Hon Nosayaba Okunbor ‘s letter reads; this is to formally inform you of my decision to resign my membership of APC.

“This decision is sequel to the division within the party which has become intractable.

“I have made strenuous efforts to ensure that this division within the party is reconciled in line with the provision of the party’s constitution, but to no avail as the leadership of the party has simply refused to allow the issues involved to be adjudicated upon.

“Consequently, I have no other option than to resign my membership as a lean Liberty they say is better than fat slavery,”.

Onobun welcomed the lawmakers to the PDP and commended their desire to work with the state governor in making Edo great again.

Meanwhile, the House adopted a resolution calling on the state commissioner of police and other relevant security agencies to address the menace of armed hoodlums unleashing terror in Orhionmwon, Esan west and other parts of the State.