2023: Next president will be fixing rot created by APC – Gov Wike 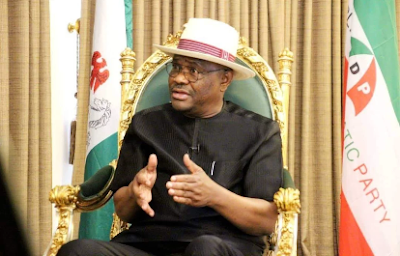 Rivers State Governor, Nyesom Wike, says the next president of Nigeria will spend his tenure fixing the ethnic, religious and socio-economic problems created by the All Progressives Congress (APC).

The governor noted that since the APC administration assumed office in 2015, religious intolerance and ethnic division have deepened. And worst still, is the politicisation of security.

He stated this during the official presentation of letter of nomination to him for the “2020 Extra Ordinary Personality of the Year Award” by the management of Silverbird Group at the Government House, Port Harcourt.

Governor Wike said, “Despite the glaring insecurity, religious and ethnic division in the country, the officials of the federal government have continued to live in denial that Nigeria is now more united and secure than ever.

“The problem in Nigeria, which I have always said is that the press, the media is part of our headache. The media have lost their voice. I remember when Goodluck Jonathan was the President; it was as if the media wanted to pull down the whole of Nigeria.

“You were witnesses to how under Buratai, the army was exposed to politics, which have never happened in the history of this country. Army began to carry ballot boxes. I have never seen that. Before we used to talk about police, now it’s no longer the police.

“Professionalism is no longer there and that is why it is difficult to fight insecurity. Instead of then to concentrate and map out strategy, what they are interested is Rivers State. Who will we send there to make sure the election is rigged. The former Chief of Army Staff will even call INEC to cancel Rivers State election because of his interest. I have never seen this kind of thing in my life.”