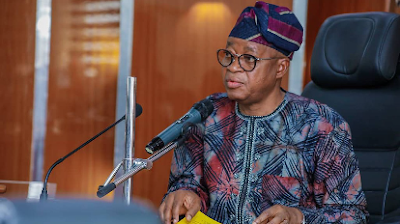 Governor Adegboyega Oyetola of Osun State has disowned 2022 governorship campaign posters that have flooded the State.

He said he was still preoccupied with the delivery of quality service to the people of the State.

The Governor, who said governance was still uppermost in his mind, added that as such, he would not want to be distracted at this critical stage of his tenure.

To this end, he called on those behind the posters to tarry a while and wait for the Independent National Electoral Commission (INEC) to blow the whistle for the contest.

In his reaction, the Chief Press Secretary to the Governor, Ismail Omipidan, said his principal had no hand in the said posters.

He wondered the curious coincidence of the story in two different media by the same reporter who goes by the name Solomon Odeniyi.

“Since none of the two media acknowledged the other as being the originator of the news item, I smell some kind of mischief and ulterior motive, especially as the promoter and patron of one of the media was a former Commissioner in the State.

“Whatever the motives or intentions are, they are dead on arrival.

“For now, the All Progressives Congress (APC) in the State is more preoccupied with mobilising the people for membership registration and re-validation exercise, while Governor Oyetola is preoccupied with governance and not politicking.

“The Governor appreciates the goodwill and the solidarity of those behind it, if truly they are genuine, but wishes to state that what is uppermost in his mind at the moment is to take Osun to greater heights,” he said.

Omipidan stated that the Governor was appealing to those behind it to channel their efforts towards supporting government’s effort at changing the fortune of the State, adding that this would probably make 2022 unattractive to the opposition.