Woman shot during invasion of US congress is dead 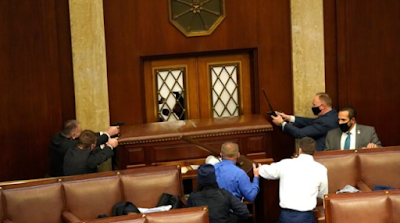 An unidentified woman who was shot during the invasion of the US congress on Wednesday is dead.

A mob had broken into the United States Capitol Hill while the lawmakers were in the process of certifying the November 3 presidential election.

President Donald Trump, who has refused to concede the election, had mounted pressure on Vice-President Mike Pence, who is the head of the US senate, not to ratify the victory of President-elect Joe Biden.

But Pence had resisted the pressure, saying he would go with the constitution.

Trump, who later said his deputy lacked the courage to “do what is right”, charged his supporters to march to the Capitol Hill.

The action of the president’s supporters had disrupted the certification process as Pence was scuttled to safety while other lawmakers took cover.

The protesters laid siege to the parliament for hours while the authorities declared a curfew.

Washington DC Metropolitan Police said at least 13 persons were arrested during the riots while five guns were seized.