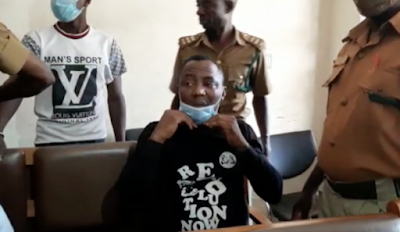 Omoyele Sowore, convener of the #RevolutionNow movement, has told a magistrate court sitting in Wuse zone 2, Abuja, that he does not want to remain at the Kuje correctional centre where he was remanded.

The police had arraigned the five persons on Monday on a three-count charge bordering on conspiracy, unlawful assembly, and incitement, and Mabel Segun-Bello, the magistrate, had ordered that they be remanded at the Kuje correctional centre.

However, at the court sitting on Tuesday, the activist said he was denied food, water, and medical attention.

“I wish to report back to the court that contrary to the order of court that we should be given medical attention and welfare, nothing has been done,” he said.

“No medical care, food, water, change of clothes and beddings. I have not even been given food. This is a plot to detain us further and inflict maximum injury.

“We were left outside for over two hours yesterday. They refused to accept us because of COVID-19 protocol. It was the CP who called the comptroller general and forced them to detain us.

“I don’t want to go back to Kuje. I was brought from a facility and I don’t mind going back there because my doctor can reach me there.”

Responding to why the order of the court was not complied with, Sanda, an officer of the correctional centre who escorted the defendants, said: “The time they came in yesterday was very late. Dr Ajayi had closed and they actually were kept in a solitary place because of COVID-19.”

Mabel Segun-Bello, the chief magistrate, asked the defendants if they would prefer to return to the police station where they were initially detained, Kuje correctional centre, or the Force Criminal Investigation and Intelligence Department (FCIID).

Sowore, who spoke on behalf of all the defendants, said they would prefer the FCIID.

Making a formal application, Marshal Abubakar, counsel to the defendants, affirmed the decision of his clients.

“Our application is that in view of the defendants’ concerns, we would be asking that the defendants be remanded at a facility that can offer access to doctor, lawyers, food, change of clothes and water within the Abuja metropolis. Preferably, FCIID area 10,” he said.

However, Adama Musa, prosecution counsel, objected to moving the defendants to FCIID.

“We vehemently oppose the remand of the defendants in the custody of the police on the ground that the defendant has previously made allegations of torture against the police,” Adama said.

“The right place for them to be is the correctional centre.”

After placing a call directly to the commissioner of FCIID in open court to inquire if there is space to accommodate the defendants, the chief magistrate ordered that they be remanded at the FCIID, Area 10, Abuja pending the determination of their bail application.

She also ordered that the accused persons be given access to medical care, sufficient food, good water and fresh air.

The chief magistrate also directed that Damilare Adenola, the third defendant, should be given access to internet facility under strict supervision to enable him continue his online school programme.

Although the court had fixed Tuesday to hear and rule on the bail application, due to copious submissions canvassed by both the counsel to the prosecution and the defendant, the chief magistrate was unable to reach a decision.

Ruling on the bail application will be delivered on January 8.