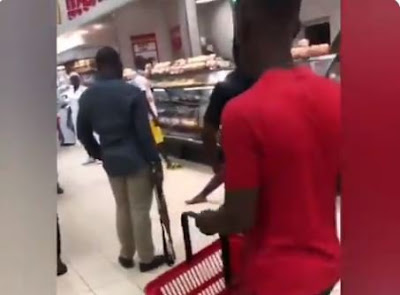 A video has surfaced on social media showing armed operatives of the Nigerian police seeking the arrest of a young man over an undisclosed crime at the Shoprite in Sango Ota, Ogun state.

The video of the arrest, which was said to have transpired on Sunday morning, is now gaining attention on Twitter.

Ruggedman, a rapper who raised alarm on the incident, said the young man was “chased into the mall”, manhandled and hit with sticks.

“Nobody hates the @PoliceNG. We just don’t like the barbaric way some of them behave. Officers from Sango Ota police station this Sunday morning of January 10, 2020, chased this young man into Shoprite,” the rapper wrote.

Nobody hates the @PoliceNG
We just don't like the barbaric way some of them behave.
Officers (in mufti) from Sangotedo police station this Sunday morning of January 10th 2020 chased this young man into Shoprite sango. Beat him up mercilessly as can be seen in this video. pic.twitter.com/nmKWM85tIG

“Beat him up mercilessly as can be seen in this video. Hitting him with sticks. These men in mufti only look like hoodlums lynching a man. @PoliceNG_CRU we await your response to this.

“I repeat that nobody hates the Nigerian police, but you need to do better. Your men are always disobeying orders of the IGP. Why are they in mufti? We hear these men are always parked by the Shoprite and harass people there.

“Let this illegal action be the last they will perpetrate there. @PoliceNG show Nigerians that you are their friend. Arrest these criminals spoiling your image. We should all play our part to make things work for us.”

In a scene from the video, the young man can be seen crying while sitting on the ground of the supermarket and asking what his crime was.

“I’m not leaving here with you if you don’t tell me what I did. My ticket is with me. Everything I bought you seized. What did I do? You want to take me to the station. You found no exhibit on me yet you want to arrest me,” he said.

In another scene, he can be seen being whisked away from the supermarket by the men in mufti.

Omo sars have started operating again o. I’m at Shoprite toll gate and they literally chased this guy inside with gun. Thank God he ran inside sef. We all gathered round him and didn’t allow them take him. Now he is stuck inside here till they leave #endsars

When contacted to speak on the incident, Abimbola Oyeyemi, spokesman of the Ogun state police, said the arrest happened after Shoprite had invited the police to report the violation of the mall’s regulations.

“Two guys came to Shoprite in Sango Ota. The private security men employed by Shoprite told them that Okada was not allowed inside the premises. But they refused to back down and started fighting the security men,” he told TheCable Lifestyle.

“They eventually fought their way into the premises, parked the Okada, and tried to enter the shopping mall. That was why the security men invited the police. The police got there and queried them on why they forced their way in.

“But they started fighting the policemen. One of them broke a bottle and wanted to stab a policeman. It was when they ran into the mall that the police later got them arrested. Tomorrow morning, they will be charged to court.”

Your complaint is hereby acknowledged and investigation has been initiated. Your tracking number is #CRU131823, Thank you for contacting NPF-CRU.

Responding to an account filed by a Twitter user to the force’s complaint response unit (CRU), the police wrote: “Your complaint is hereby acknowledged an investigation has been initiated. Thank you for contacting NPF-CRU.”

In October last year, thousands of Nigerians had taken to the streets to protest against the now-disbanded special anti-robbery squad (SARS).

The country’s youth had accused the police unit — which normally carry out their duties on mufti — of killings, extortion and torture.