US: Nigerians instigating violence should be dealt with like Trump – Onochie 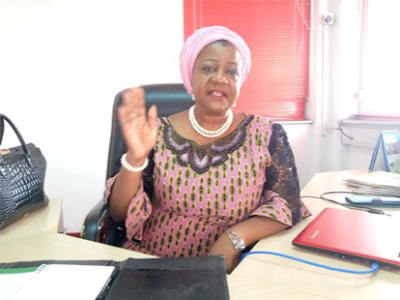 President Muhammadu Buhari’s Senior Special Assistant on Social Media, Lauretta Onochie, has proposed that those who instigate violence in Nigeria should be dealt with henceforth.

Onochie said this on Thursday morning while reacting to the second impeachment of US President, Donald Trump.

Recall that Trump for the second time was impeached by the House of Representatives on Wednesday.

The House voted 232 to 197 on Wednesday, a week after the Capitol attack on the allegation that Trump incited the violence.

The House Democrats were able to secure the support of 10 GOP lawmakers to impeach Trump.

Trump had since the November 3 presidential election, continued to make comments worthy of rising tensions and violence in the US.

Reacting, Onochie on her Twitter page proposed that those who instigate violence all in the name of ‘freedom of speech’ in Nigeria should also be dealt with.

Her tweet read: “President Donald Trump has been impeached for a record 2nd time in the history of America for instigating an insurrection.

“In America, its insurrection. In Nigeria, they called it freedom of speech.

“There ought to be consequences for those who instigate violence in our nation.” 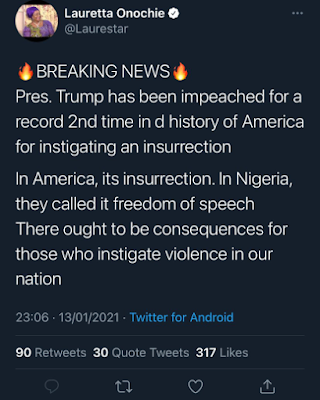