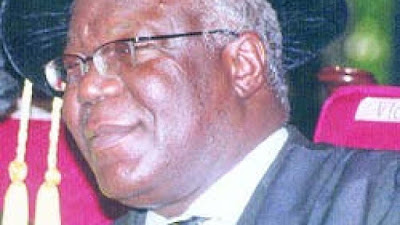 Former Vice-Chancellor of the University of Lagos, Prof Oyewusi Ibidapo-Obe, is dead.

The scholar passed away Sunday afternoon.

The management of UNILAG has confirmed his death.

Olayinka Balogun, Registrar and Secretary to the Governing Council, prayed for the repose of the deceased’s soul.

“With heavy heart, and submission to the will of God, I write to inform Council members of the transition to glory of Professor Oye Ibidapo-Obe, the Pro-Chancellor and Chairman of Council, First Technical University, Ibadan which occurred today 03/01/2021”, he noted.

Ibidapo-Obe graduated from UNILAG with a Bachelor’s degree in Mathematics.

He was a Visiting Research Associate Professor, Department of Civil Engineering at the State University of New York at Buffalo, USA (1980 – 1981).

Similarly, he was a Visiting Research Professor at Texas Southern University in Houston, (2007).

Ibidapo-Obe was named UNILAG VC in 2000 and was succeeded by Professor Tolu Olukayode Odugbemi in 2007.