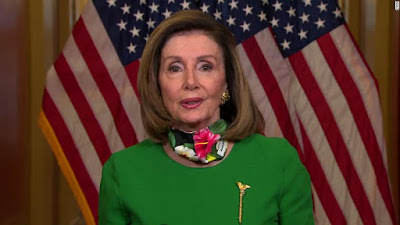 Speaker Nancy Pelosi on Thursday called President Donald Trump “a very dangerous person who should not continue in office.”

She, however, called on Vice President Mike Pence and the Cabinet to invoke the 25th Amendment, which allows for the removal of President Trump if he is unable to discharge his duties.

If they fail to do so, she said the Congress “may be prepared to move forward with impeachment” against Trump for instigating rioters to attack the Capitol building on Wednesday.

“In calling for this seditious act, the president has committed an unspeakable assault on our nation and our people,” Pelosi said.

One woman was shot and killed by a Capitol police officer, and it took several hours for order to be restored. More than 50 officers were injured in the melee, and several were hospitalized with serious injuries.

Senate Democratic Leader Charles Schumer earlier on Thursday called for the invocation of the 25th Amendment.

Schumer said that if they failed to act, Congress should reconvene and impeach him. Several House Democrats were circulating articles of impeachment on Thursday morning.

Trump had addressed the crowd before the riot, urging them to march on the Capitol in order to put pressure on Republican senators who were unwilling to overturn the presidential election.

This comes less than two weeks before Joe Biden and Kamala Harris will be inaugurated as president and vice president.

In the early hours of Thursday morning, the joint session of Congress completed the job of certifying Biden and Harris as the winners of the 2020 election. The two houses twice convened in separate sessions to consider objections to the electoral count in Arizona and Pennsylvania. After debate, both objections were defeated by overwhelming margins in the Senate and narrower margins in the House.

Meanwhile, the FBI and local police were reviewing video in an effort to identify and prosecute those who trespassed in the Capitol building.

Trump was impeached in December 2019 on charges of abuse of power and obstruction of Congress, after pressuring the Ukrainian president to announce a corruption investigation of Biden’s son. In that case, he was acquitted by the Senate, with all Republicans except Sen. Mitt Romney voting to acquit on both charges.