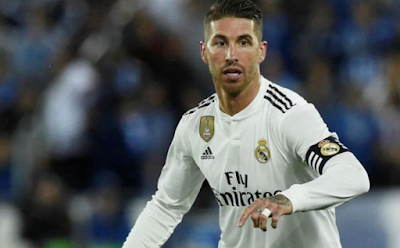 Real Madrid captain, Sergio Ramos, has warned the Spanish giants, that Paris Saint-Germain are keen to create a super-team by signing him and Lionel Messi.

Ramos has so far stalled on signing a new contract.

Los Blancos are waiting to see if their legendary defender will extend his deal at the Bernabeu, with a contract already on the table for him to sign.

As it stands, the 34-year-old is out of contract in the summer and he can currently speak to other clubs.

One club that is very keen is PSG, who have reportedly told Ramos they want to add him and Messi to their already star-studded team with Neymar and Kylian Mbappe.

Reports from Josep Pedrerol on Spanish programme El Larguero states that Ramos had a cordial meeting with Real president Florentino Perez before the Elche game, in which he said “I am not accepting the proposal you have made to me… and from now on I will listen to offers.”

It also claimed that Ramos added that, “Someone from PSG has told me that they are going to create a great team with me and [Lionel] Messi.”