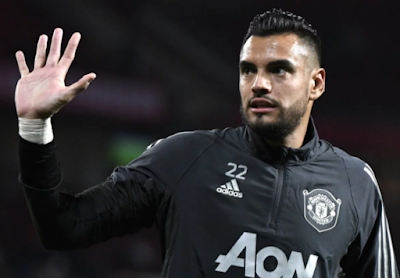 Manchester United goalkeeper, Sergio Romero, has said goodbye to his teammates and the club staff ahead of a January transfer exit.

Romero’s contract with Man United expires at the end of the season but the Argentine has already bid his farewells at the club according to Manchester Evening news.

His time at Man United has ended on a sour note after 5-years of acting as a competent understudy to first-choice, David de Gea.

This is coming less than 24hours after Man United was eliminated from the Carabao Cup on Wednesday night by Manchester City.

Romero fell further down the pecking order after goalkeeper, Dean Henderson was recalled from his loan from Sheffield United.

Henderson started the Carabao Cup defeat to Man City at Old Trafford ahead of Romero.

Romero was left frustrated after being dropped from Man United’s Europa League and Premier League squads this season.

The 33-year-old hasn’t trained with Ole Gunnar Solskjaer’s side since the beginning of the year and is hopeful he will be allowed to seal a move away from Old Trafford this month.