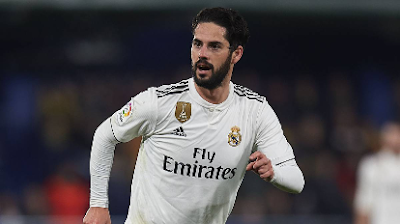 Real Madrid midfielder, Isco, has ruled out any possibility of joining Arsenal in the January transfer window, according to AS.

Isco’s preference is to remain in the Spanish La Liga and join Sevilla for family reasons despite interest from Arsenal.

The 28-year-old prefers to reunite with his former manager, Julen Lopetegui, who he worked with at Real Madrid and Spain’s national team respectively.

The Spain international has asked to leave Real Madrid in January having failed to secure a regular playing game time under the Los Blancos manager, Zinedine Zidane this season.

Arsenal have been linked with a loan move for Isco this January transfer window.

Isco has started just three games in all competitions this season for Zidane’s men.

His deal runs until 2022, but Real Madrid are eager to get his £6million wages off their books.