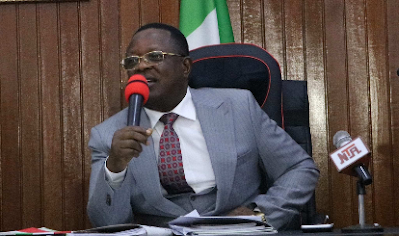 Udogu made this known while speaking with some journalists in Abakaliki, Ebonyi State capital.

He said: “For the governor, it means that everybody must join him to APC and if you don’t join him, you are his enemy. And that is his own position. Political parties are like organizations were anybody has his/her own mind to join or not.

“I have been a member of PDP before Umahi came into politics and he cannot decide for me a party to join. The problem is that, if he had left PDP quietly, nobody would have had issues with him. But he left PDP and still fighting us and initiated a fight in PDP which is not fair.

“We are not in the court because of the PDP Secretariat. The Secretariat belongs to PDP whether anybody likes it or not. It was built under Dave as the chairman of PDP by the former governor His Excellency Chief Martin Elechi.

“Nobody is dragging the Secretariat, it just that they are lacking on what to hook on. They have no programs and that’s why they are looking for programs. If they have programs, they shouldn’t be fighting an imagery war.

“I was one of the instruments which God used to install Dave Umahi as the governor, he can’t say, he doesn’t know. He knows what I did. I nominated him to Elechi as the caretaker Chairman. I played so many other roles in which God can bear me witness on what happened.

“I have always said it that if what Umahi did to me is good to God, I accept.

“He has left PDP and I was nominated to head the Party. I didn’t fight him and I had no intention to fight him. He is busy sending to me a WhatsApp messages I sent to him years back, when we were more friendly to people and to me, reminding me of the past. But did I gain anything from him as a governor? no. That’s why I’m not complaining.

“For him to have ordered that i should return that vehicle, means that he doesn’t know or remember the past. He forgot so easily. Car is nothing to me for the role I played for him to become Chairman, deputy governor and now governor.

“But the one I will not take lightly, is the threat to my life because he is busy sending text messages I sent to him to some thugs who didn’t know me very well. Because if they knew, they wouldn’t have done that. I trust in God and God works for me. I have gotten the identity of most of them.

“I have never joined cult in my life, if he says all of us are cultists, no problem including him. But it will be better for him and state, If he will mind his own business, and do the runnings of the state. Yes, there are areas he has done well, I can appreciate and thank God for given us somebody like him in such areas he has done well. Let him concentrate in his administration and leave me alone and some other people.

“Let them stop threatening my life because I’m not from the wind, I’m a human being. They have to be very careful, because if anything happens to me, if there is any attempt on my life, there will be questions.

“He talked to me on 7th in the night, i know the date and time. He was busy sending to me a WhatsApp messages and I didn’t reply him. He is still the governor of my state.

“His boys started talking and sending to me text messages even calling me on phone making threats. They are not operating from the moon. They are within Ebonyi state. He should be very careful. I respect Umahi as the governor of my state.

“His boys are threatening me. I can show you some of the text messages they sent to me. And each of them that sent text, have continued to say that I must apologize to the governor with immediate effect.

“I asked one of them, do I have any problem with the governor? Did he tell you that I’m quarrelling with him? I’m on my own and hails from Ikwo and he (Umahi) hails from Uburu.

“We were friends because he wanted to get into power. Since he got into power, we have not been friends again since his first tenure. He appointed me as a member of a board, since the day I reported to that office till the day I left, I never saw peace. I saw peace only when I left that office.

“It is better he allows me to do my job in the state, he claims to be making peace with our leaders but he is busy fighting some of us. How can he achieve such peace?

“Umahi should leave me alone. If have done anything bad to him, he should call me on phone and ask me why are you doing this? There is nothing I said that is not in existence in the state. If he wants me to stop talking, than he should stop doing those things.

“I cannot wakeup in the morning and start attacking a person of the governor because I am not a mad human being. We could be of the same age, but the governor should respect me as much as I respect him, which I am doing. And should stop issuing me a threat. Nobody has monopoly of violence.

In a swift reaction, the Governor who spoke through his special assistant on Media, Francis Nwaza denied the said threat on the PDP caretaker chairman, Chief Fred Udogu, and called on the citizens of the State to disregard it.

“You see these things people do this days, trying to drag the name of a popular person into their misfortune is bad. People do politics over everything. If you are known for unholy character, must you drag the name of a governor to take cover.

“He is focused on the development of the state and has no time for this kind talk. Who is he that the governor will send somebody to go and attack? There is no such thing and it never happened. People should discard such statement from people who are just looking for popularity. Such a thing never happened.

“The governor is APC and APC is the governor, and he is so focused. Maybe they are having internal crisis or not. It is their problem and why are they dragging the name of the governor into it?” He asked.