Seven things you must do for pigeons to fly at events 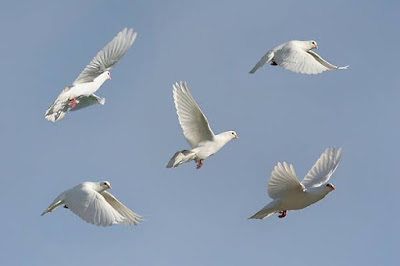 Pigeon or dove release is usually done at occasions to symbolise peace or to commemorate the passing of a loved one.

At such occasions, a single bird or a flock is released from a cage thereby creating a beautiful scene to behold.

However, when the release is not properly executed, the birds may not fly which may lead to disappointment.

Here are seven things you must do to avoid such:

1. Ensure the wings of the birds are not clipped

Delhi-based animal rights worker, Shaleen Attire was quoted by Scroll, saying, “Many traders clip the wings of the birds they try to sell.” When such birds are released from their cage, they won’t be able to fly. Even if they try to, they won’t be able to fly far away from the cage. The sellers do this so that they can easily gather them for use some other time. To avoid such, make sure the birds you are buying don’t have their wings clipped. You can do this by examining the wings of the birds to see if some feathers are not trimmed off.

Even when a bird’s wings are not clipped, it might still not fly off when it is released from the cage it has been in for quite a long time. This might be because it sees no life outside the cage where it gets its needs like food and water. “Many of the bird species that are traded have not been raised in the wild, so they have lost their instincts for hunting and self-preservation,” Attire said. But when birds freshly captured from the wild are released from a cage, they fly off immediately because they must have been longing for freedom.

3. Make sure they are in an environment where they will be safe when released

Pigeons which have been domesticated for too long may find life outside of their cage to be unsafe. Pigeon Rescue explained that domesticated birds released at events are likely not going to fly away. Giving an instance that happened at a funeral, the blog said “mourners had to pull them out of the cage and throw them in the air but even so, only a few flew anywhere (they knew they weren’t safe). One was hawk-struck, another run over… others flew away (but they won’t survive).”

4. Hire professionals to do the job

According to Dove Line, hiring professionals is the most humane way to perform a dove release. They know how to transport and handle the doves safely. By renting professional doves, you also know for certain that they have been trained to return to a specified home-point.

Connect2Local advises that no dove release should be conducted without the aid of a professional handler. Although couples or family members may hold the doves in their hands or help with the release, there should be professionally trained staff present throughout the entire ceremony to ensure the safety of the birds and the guests.

Some dove release companies will not rent their doves under certain weather conditions, Dove Line said on its website. When the weather doesn’t favour the release of birds at events, it is advisable to release balloons. This will be in concern for the safety of the birds.

6. Don’t release indoors or at night

Doves should not be released indoors or at night. They are not nocturnal animals and need the sun to find their way back to their loft. In addition, if you release doves indoors, it could cause the birds to panic from having nowhere to escape and cause distress to family members and guests during your celebration.

Squabs are young pigeons which can barely fly. They will likely remain in the cage when released or crash when they take off.