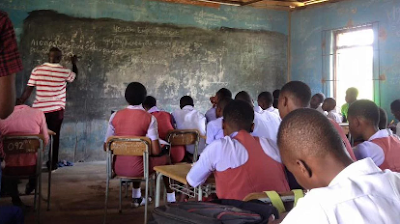 Edo State Council of the Nigeria Union of Teachers (NUT) has advised parents and guardians to forget about taking their children and wards to school on Monday, February 1, 2021, insisting that its indefinite strike continues.

This follows ranging war’ between the union and the state government over the indefinite strike declared by the former.

Recall that the state government had last Thursday in a statement signed by Osarodion Ogie, Secretary to the Edo State Government ordered public primary school teachers and School- Heads to resume academic activities unfailingly on Monday, February 1, 2021 or risk forfeiture of salaries. Just as it also threatened to apply “No work, No Pay” policy as a reaction to the NUT last Wednesday directive which ordered all its members to ignore the proposed resumption date by the state government even as negotiations to resolve the strike continue.

According to a press statement made available to newsmen by the chairman, Pius Okhueleigbe, Assistant Secretary General, Moni Mike Modesty in Benin city, the state capital on Sunday, the union appealed to parents and guardians to keep their children and wards at home pending when the issues in dispute are favourably resolved as their teachers are resolute in ensuring that “Freedom is now or Never”.

“The union has not called off the indefinite strike embarked on since January 18, 2021. We urge public primary school-heads, teachers, parents, pupils and the general public to disregard all forms of threats, blackmail, intimidation, announcements, pronouncements and moves from any quarter, aimed at discrediting the indefinite strike action.

“None of these anti- democratic tactics will utter the unshakable resolve of the union and her members in ensuring that teachers 10-point demands are met by the Edo State Government.

“The attention of the Nigeria Union of Teachers, NUT, Edo State wing has been drawn to some pronouncements purportedly made by the Edo State Government with regard to the ongoing indefinite strike action embarked on by public primary school teachers and School-Heads in Edo State since 18th January, 2020.

“Wherein, it has been reported that the government has issued a threat of “No Work, No Pay”, amongst others, to striking teachers with effect from 1st February, 2021.

“Ordinarily, the Nigeria Union of Teachers (NUT), Edo State wing would not have bothered to respond to the said pronouncements because they were directed at rthe “National Union of Teachers”, a body unknown to the constitution and laws of the Federal Republic of Nigeria, but considering some parts of the pronouncements that bear teachers issues presently in dispute between NUT, Edo State wing and Edo State Government.

“The indefinite strike action by public primary school-Heads and teachers which started on the 18th day of January, 2021 is still very much in force, hence by Monday, February 1, 2021, it will continue unhindered in the (18) eighteen Local Government Areas of the state,” the statement added.