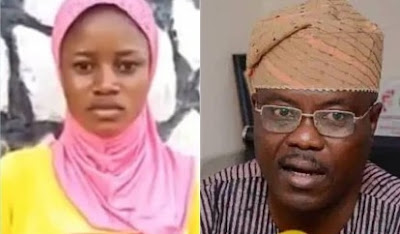 Despite the withdrawal of the s3xual harassment allegation against the suspended Ogun State Commissioner for Environment, Abiodun Abudu-Balogun by his accuser, the police have insisted that he must be investigated.

The Ogun State Police Command confirmed that the case has been transferred to the state Criminal Investigation Department as of Monday.

Recall that a 16-year-old girl from Ogun Waterside, Barakat Melojuekun on Saturday accused the Ogun Commissioner for Environment, Abudu-Balogun of s3xually harassing her in his house.

The allegations brought about the suspension of the Commissioner by the Dapo Abiodun-led Ogun State Government on Sunday.

But in a dramatic twist, the accuser and her father spoke in separate videos, asking that the matter be laid to rest.

The father of the teenager, Adesola Melojuekun said he was withdrawing the case, saying he was no longer interested in the matter.

However, the police in Ogun State said the issue is still under investigation.

In an exclusive interview with Daily post, the state Police Public Relations Officer, Abimbola Oyeyemi, told our correspondent that neither Barakat nor her father could withdraw the case at this point.

Oyeyemi insisted that whether the accuser and her father are interested in the case or not, the police must get to the root of the matter.

“We are still investigating the s3xual harassment allegation involving the Ogun State Commissioner for Environment and the case has been transferred to the state CID.

“Whether the girl and her father are interested in the case is not our own business. It is not their own prerogative to say they are not interested.

“The father has no right to withdraw the case because he is not the direct victim.

“The victim herself is not capable of withdrawing the case. Either they are interested or not, the police must get to the root of the matter,” Oyeyemi stated emphatically.