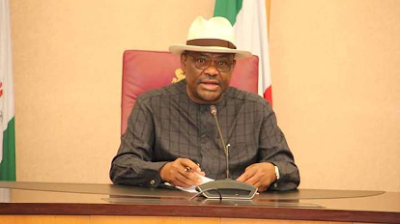 A group under the aegis of CLUB-401 has dragged the Rivers State Government to court over the building of multi-million Naira homes for Judges in the State.

CLUB-401 in the suit filed at the Federal High Court, Port Harcourt said the action of the Governor was a bad precedent because it violates the rule of Separation of Powers as enshrined in Nigeria’s 1999 Constitution.

The group also questioned the purchase of vehicles for members of the National Assembly, the building of hostels and auditorium for the Nigerian Law School in Bayelsa State, the building of quarters and offices of Federal establishments and hosting of conferences for professional organizations; all with Rivers State funds.

The suit is also asking the Court to make declarations that Governor Nyesom Wike should stop spending funds that are not appropriated for in the budget on the things that have no economic value for Rivers State.

The suit reads in part; that; “the Court should make a declaration that the principles of Separation of Powers and Rule of Law as provided in the Constitution of the Federal Republic of Nigeria, 1999, it is not within the powers of the Governor of Rivers State to build houses for retiring or retired Chief Judges and Presidents of the Customary Court of Appeal of Rivers State outside the budget of the Judiciary as contained in a duly approved Appropriation Law of Rivers State and contrary to all extant Laws for the benefit of retired judicial officers in Nigeria and public officers in Rivers State such as the Pension Rights Judges Act.

Attorney General of Rivers State, Speaker of the Rivers State House of Assembly and the Council of Legal Education of Nigeria are all defendants in the matter.

The suit is yet to be fixed for hearing.

In September, 2020, Rivers State Governor, Nyesom Wike handed over some finished blocks of duplexes to accommodate Judges in the state.

Governor Wike also announced that N150 million has also been handed to Judges who opted for cash payments to build their own houses.