Police plotting to detain Sowore for as long as possible -Sources 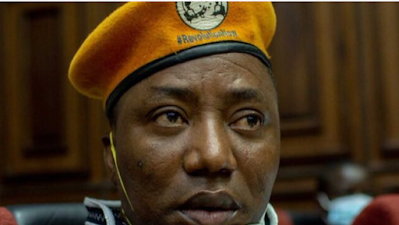 Mohammed Adamu, inspector-general of police, has instructed his men to detain Omoyele Sowore, convener of #RevolutionNow Movement, “for as long as possible”, according to sources.

Sowore and four others were arrested on New Year’s eve during a protest “against bad governance”.

They were subsequently arraigned on a three-count charge bordering on conspiracy, unlawful assembly and incitement, and remanded at the Kuje correctional centre in Abuja.

Marshal Abubakar, counsel to the defendants, moved a bail application on behalf of his clients after which Mabel Segun-Bello, the magistrate, reserved ruling for Friday.

The magistrate also transferred the defendants to the force criminal investigation and intelligence department (FCIID) in Area 10, Abuja, after Sowore reported that they were denied access to healthcare, food, and water.

However, at the court session scheduled for ruling on bail applications, the defendants were absent.

Abubakar told journalists that the police refused to bring his clients to court because they are no longer in their custody and there is no available means of transportation for them.

He said he received information that the DIG of FCIID requested the case file of Sowore from the office of the commissioner of police in Abuja.

Reaching out to the FCIID, Abubakar said they insisted that they do not want to bear the responsibility of Sowore’s case because of its nature, “which is political”.

The counsel added that a signal was sent to the court stating that the attorney-general of the federation (AGF) has mandated the office of the directorate of public prosecution (DPP) to take over the case file from the police.

However, there was no legal representative from the DPP in court.

Funmi Eguaoje, public relations officer of FCIID, refused to comment on the issue when contacted.

There was also no response from Frank Mba, force spokesman, and the office of the AGF.