Panic buying: Guns selling out in US ahead of Biden’s inauguration 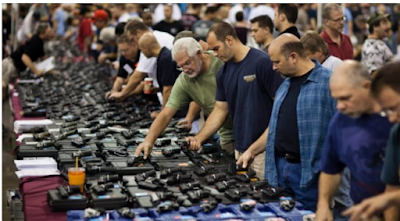 Americans are reportedly panic-buying guns ahead of the inauguration of Joe Biden as president.

Forbes is reporting that gun shops are selling out Glocks and other brands as Americans anticipate gun control measures from the incoming president.

Typical of Democrats, Biden is expected to introduce tighter regulations, unlike outgoing President Donald Trump who has appeared less keen about such moves.

With almost 40,000 people dying as a result of firearm injuries every year in the US, Biden plans to hold manufacturers accountable and get weapons off the streets.

In contrast, Trump once assented to a bill rolling back an Obama administration’s regulation that made it harder for mentally ill people to purchase guns.

In 2019, he threatened to veto legislation that would require universal background checks for most gun purchases or transfers.

But as the Democrat becomes the 46th president on Wednesday, Glock handguns, ArmaLite Rifle among other brands are said to be “selling so fast.”

Danielle Jaymes, general manager of a California-based gun store, was quoted by Forbes as saying she sold a shipment of 192 Glock 19s in a week while 9mm ammunition is “so popular that she rations purchases to 100 rounds per day.”

“People will take whatever they can get because supplies are so limited. If I had a million rounds of 9 mm right now, I could sell it in two days,” she reportedly said.

“We’re selling a lot of ARs. I really can’t keep the ARs on the wall. A lot of people are worried about the assault weapon ban we’ve heard our President-elect and our Vice President-elect talk about.”

According to the Washington Post, about 23 million guns were sold in the US in 2020 — the highest annual record representing a 64 percent increase over 2019 sales.