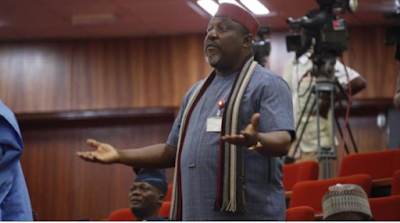 Ohanaeze reminded Senator Okorocha that the task ahead of Ndigbo is to work towards the emergence of a Nigerian president of Igbo extraction, stressing that dabbling and interfering in Ohanaeze politics and causing crisis in Igbo land may bring doubts in the minds of Ndigbo and Nigerians over his presidential ambition.

The highest Igbo group, in a press release signed by its President, Igboayaka O. Igboayaka on Tuesday, advised Senator Okorocha not to be distracted in his quest to vie for the number one position in Nigeria come 2023, but should use the remaining time ahead of 2023 to reconcile with all political factors and become an ambassador of peace in Igbo land.

OYC further noted that it is unreasonable and unacceptable for Okorocha to be pulling the strings and pushing Mr. Chidi Ibeh to be distracting the whole Igbo race on his purported election and reckless press releases parading himself as the President General of Ohanaeze Ndigbo.

“The crux of the matter has ended in Prof. George Obiozor’s emergence as the President General of Ohanaeze Ndigbo in the election held on 10th January at Owerri, therefore, every progressive and reasonable Igbo person should drop his or her grievances and work with Prof. Obiozor for the overall interest of Ndigbo, “the group stated.

“Anyone who disagrees to bring what he or she has on the table to join forces with Prof. Obiozor to make Alaigbo politically and economically viable must have a selfish interest to undermine Alaigbo, and such persons must be resisted by Igbo youths across the globe, “OYC further warned.

The Ohanaeze youths noted that fundamentally, anyone who loves Igbo land shouldn’t have hand in fueling crisis, or to make Igbo land a war zone, but should diplomatically aid in maintaining a peaceful atmosphere through dialogue, negotiation and reconciliation.

“No one’s interest can override the general interest of Ndigbo, therefore Prof. George Obiozor has adopted negotiation, reconciliation and dialogue and workable tools to build a new Igbo society and should be embraced by all progressive and patriotic Igbo groups and leaders.

The highest Igbo socio-cultural body, noted that Professor Obiozor has mapped out agenda for reintegration of all interest groups in Igbo land into the mainstream of political and economic development of Ndigbo in Nigeria political project.

Recall that two different elections held consecutively on Saturday and Sunday which produced Chidi Ibeh and George Obiozor as the President Generals of Ohanaeze Ndigbo.