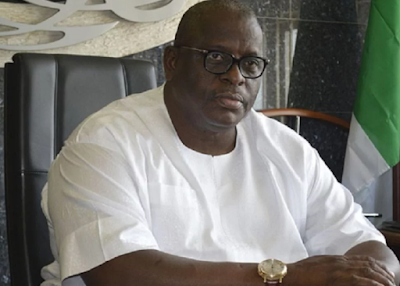 All seems not well with a faction of the Peoples Democratic Party left behind by Late Senator Buruji Kashamu in Ogun State.

This is as followers of the late politician have split into two groups, suspending one another for alleged anti-party activities.

Kashamu was said to have died of complications from the deadly coronavirus, in August 2020.

Until his death, Kashamu was in control of the PDP in Ogun State as he contested for the governorship seat in 2019.

After his death, the Hon. Ladi Adebutu faction of the PDP took over the state party secretariat, while the Kashamu camp remained without a leader with strong financial backing.

In November, a group within the Kashamu camp suspended its State Chairman, Samson Bamgbose and five other executive members of the party.

With their acclaimed suspension, one Barrister Boladale Sanni was appointed as the Acting State Chairman.

However, in a swift reaction, Bamgbose and others rejected their suspension, saying the group behind the pronouncement did not have such powers.

The group confirmed the suspension of the State Acting Chairman appointed by its rival group, Boladale Sanni.

Bamgbose, in a press statement signed by one Ajayi Abayomi, who was identified as the acting Publicity Secretary, confirmed the suspension of other executive members like Adeleke Shittu and Sunkanmi Oyejide.

“This is to inform the General Public that the People’s Democratic Party (PDP) Ogun State Executive Committee (SEC) under the Chairmanship of Chief Samson Bamgbose met and considered the report of the Disciplinary Committee headed by Mr. Bola Odumosu, after robust deliberation, approved the suspension of the following State Executive Members: Mr. Adeleke Shittu, Mr. Boladale Sanni and Mr. Sunkanmi Oyejide.

“They were suspended for various anti-party activities as recommended by the Committee in accordance with Section 58 and 59 of Our Party’s Constitution, as such, they remain barred from parading themselves as PDP State Executives Members,” the statement read in part.

It will be recalled that the Ladi Adebutu faction of the PDP has Hon. Sikirulahi Ogundele as the state Chairman.

Ogundele is recognised by the Uche Secondus-led PDP National Working Committee as the Chairman of the party in Ogun State.

But Kashamu loyalists said they have a court judgment that confirmed their faction as the authentic executive in Ogun.