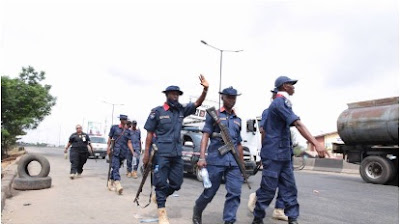 A 10-man gang of suspected illegal refiners of Automotive Gas Oil (AGO) have been arrested by the Nigeria Security and Civil Defense Corps (NSCDC) in Lagos State.

Mr Paul Ayeni, the state NSCDC Commandant, while parading the suspects on Monday in Lagos, said the NSCDC collaborated with the Nigerian Navy Ship (NNS) to arrest the suspects on Jan. 23.

Ayeni who explained that the suspects were intercepted in a wooden boat in Badagry area of Lagos State, added that three of them are from Awoye Community, Ilaje, Local Government Area, Ondo State while seven others hail from Isoko North Region of Delta.

Exhibits recovered from the boat included; 20 GeePee tanks of 1,500 litres each and 16 drums suspected to be Automotive Gas Oil (AGO).

The Commandant said the suspects would be charged to court when all investigations are concluded.