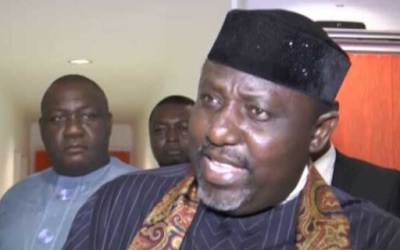 Imo State Government has claimed the discovery of missing equipment of Nsu Ceramic and Tiles Industry in a warehouse owned by former governor, Rochas Okorocha, along Owerri/Aba road.

The administration of Sam Mbakwe established the industry in the early 1980s, but Okorocha’s government attempted to resuscitate it.

The Commissioner for Commerce and Industry, Simon Ibegbulem, told newsmen in Owerri, yesterday that the government assets were discovered by his team in the warehouse.

The warehouse, it was gathered, is adjacent another one where the then Emeka Ihedioha administration allegedly discovered some of state’s properties.

According to him, the discovery was made possible after some patriotic citizens of the state revealed the hidden warehouse to the government.

“The equipment were looted from Ehime Mbano Council, the location of the industry, to the private warehouse of Okorocha (for use) to establish a personal industry.

“We gathered from those guarding the warehouse that sometimes, Okorocha’s people come here to pick some items and sell.

“However, some of the equipment we are looking for are here and we have come to take possession of the Imo properties. Anybody we see here will blame himself. We have taken over the government properties for the good of Imolites based on their demands,” Ibegbulem said.

BUT Okorocha, now a senator representing Orlu, has denied the state’s claim, tasking it to produce proof of ownership.

His media aide, Sam Onwuemedo, told The Guardian yesterday: “The government should disclose or publish the proof of ownership of all they claimed they had recovered.

“If Okorocha wanted to hide any item, could he have done so at a warehouse along the busy Aba road and opposite one of the biggest markets in Owerri, the Alaba International Market?”

He called on the police to investigate those in police uniforms, who invaded the warehouse, to find out whether they were really Nigeria police, “since it was not expected that police men would have gone for the invasion of the warehouse, without a valid court order.”

HOWEVER, the Senior Special Assistant to the Governor on Print Media, Modestus Nwankpa, said the government needed some to get back to Okorocha.