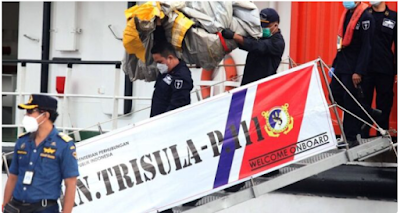 Indonesia has located the black boxes of the Sriwijaya Air jet which was declared missing minutes after it took off from Jakarta, the country’s capital.

Officials lost contact with the plane on Saturday, not long after it headed for the city of Pontianak on the Borneo island.

Before it was declared missing, the Sriwijaya Air Flight 182 was reported to have lost more than 10,000 feet of altitude in less than 60 seconds, four minutes after taking off.

Among the passengers were six children and three babies, Reuters reported.

Soerjanto Tjahjono, chief of Indonesia National Transport Safety Committee, was quoted as saying the location of the plane’s two black boxes has been identified.

Rescuers brought the debris to Jakarta port, including a twisted piece of metal which was painted in Sriwijaya Air’s blue and red colours.

Officials reportedly said the pieces of wreckage came from a depth of 23 metres near a group of islands off the Jakarta coast.

The crash is the first major air mishap since 2018 when a Boeing 737 Max plunged into the Java Sea soon after takeoff from Soekarno-Hatta International Airport.

According to the Aviation Safety Network’s database, more people have died in air crashes in Indonesia than in any other country over the past decade.