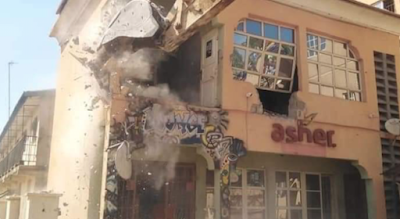 The Kaduna State Urban Planning and Development Agency (KASUPDA) has shed more light on why Asher Kings and Queens Restaurant in Barnawa area of the state, was demolished.

The lounge was pulled down on Thursday over allegations of immoral act.

The agency had alleged that the hotel was the proposed venue for a sex party — but a flyer attached to the tweet had no detail of the proposed location for the party.

Aisha Yakubu, chief executive officer (CEO) of the restaurant, said there was no planned sex party at her restaurant.


Yakubu said her business was registered at the Corporate Affairs Commission (CAC) as a restaurant and an event centre — not a hotel, adding that she would seek redress over the demolition.

However, while briefing journalists on Tuesday, Ismail Umaru-Dikko, director-general of the agency, said an inaccurate statement on the Twitter account of the agency sparked different reactions over the demolition.

He said indications of the plan to hold an activity that violates the COVID-19 regulations in the restaurant drew attention to the property, making it necessary to check the building status.

The DG said checks of government record revealed that the building housing the restaurant had neither a valid title nor a development permit.

He said the illegal status of the building also necessitated the enforcement action that was carried out by the agency.

“Since this enforcement action, much of the commentary on the matter has centred on the inaccurate statement from KASUPDA’s Twitter account.

“While regretting the inaccuracy of the handler of our social media account, there is no reservation about the steps taken pursuant to enforce the laws and regulations of Kaduna State on a property that was in violation of its provisions.

“Since 26th March 2020, the Coronavirus Disease (COVID-19) Partial Lockdown Order, 2020 have been in force in Kaduna State. Although some of the regulations were significantly relaxed in June 2020, they were tightened again in December 2020 in response to the second wave of Covid-19 infections.

“Indications that an activity in violation of the Covid regulations was planned to be held in Asher Lounge drew attention to the property and made it necessary to examine the status of the building.

“Once due diligence revealed the illegal status of the building, there was need for enforcement action without the notification requirements that the law compels for holders of valid title and development permits.

“The illegal status of the building became a very separate matter from the trigger event: the third-party elements who had planned and advertised an unlawful gathering on those premises.”