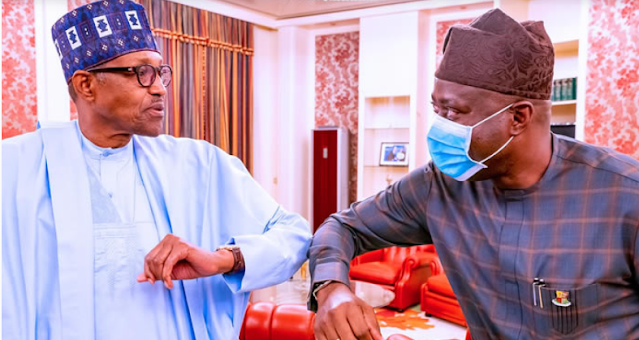 Though details of the meetings are yet to be known, it was gathered that issues on insecurity in the states, especially the herdsmen crisis, were discussed.

Earlier, the President and Ooni of Ife, Oba Adeyeye Ogunwusi, met behind closed doors in Aso Rock on the brewing ethnic crisis in Yorubaland.

An aide to the monarch disclosed that the Ooni told the President the positions of traditional rulers in South-West on the activities of the herdsmen.

According to the aide, who prefers anonymity because he was not authorised to speak to the press on the matter, Ooni told the president about the damage done by some criminal herders in Yorubaland.

“They also discussed other important national issues. Kabiesi will give details later.”

Photographs released by the presidency in the early hours of Wednesday showed that Buhari’s Aide-de-camp, Col ML Abubakar as well as the Chief of Staff to the President, Prof Ibrahim Gambari, also attended the meeting.

Governor Rotimi Akeredolu had issued a two-week quit notice to the herders to leave the Ondo State forest reserves, arguing the criminals among the herders are using the reserves as hideouts for their heinous activities.

Also, on Friday, January 22, popular Yoruba rights activist, Sunday Igboho, and his supporters stormed Igangan town in the Ibarapa area of Oyo State to chase the Fulani heders out of the community after the expiration of a quit notice earlier issued.