Gov Umahi reveals those sponsoring bandits, speaks on ‘eviction of Northerners from Ebonyi’ 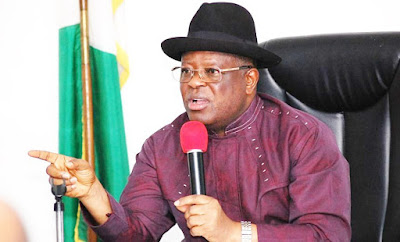 Governor of Ebonyi State, Dave Umahi has accused those he described as desperate politicians of sponsoring banditry with the sole aim of destabilising Nigeria.

Umahi, Chairman of the South East Governors Forum, said this on Tuesday after a virtual meeting with the five governors of the region in attendance.

“There are so many desperate politicians in all the political parties that are so desperate for power and they have aligned with some bandits in the southeast to destabilise the nation,” the Governor, who recently dumped the Peoples Democratic Party, PDP, for the All Progressives Congress, APC, said.

He expressed worries over the killings and kidnappings going on in the South-East, adding that “the situation is being heightened by the activities of very desperate politicians, this time irrespective of party affiliations.”

Umahi further spoke on a viral social media video, where northerners were allegedly being evicted from Ebonyi State, insisting that the video was doctored by politicians.

“The Fulani settlement decided to move to Taraba State and retained some of the family members in Ebonyi State and of course, the man is still here.

“Politicians as we have intelligence gathering, went to put a voice and said it is the Igbos that are chasing away the herdsmen from Ebonyi State,” he said.

He said that the viral video caused panic in other parts of the country, noting that about 11 million South Easterners also live in the North.

He warned that while perpetrators of such wicked acts may think they want to pull down a particular governor, they may end up causing mass killings of Igbos in other parts of the country.